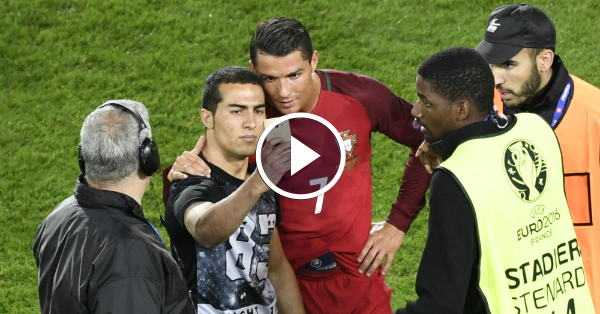 All across the world, there are billions of people who love Cristiano Ronaldo. Strangely enough, even many people those people who do not have any particular love for the sport of football love Ronaldo. Why? Because, Ronaldo is a youth icon. His status, success, money, good looks, constant presence on the social media, bad boy attitude – everything put together makes him desirable. Plus, millions of football fans would give anything to watch him play. And, all these crazy fans would do anything to meet Ronaldo in person. That is why, when fans meet Cristiano Ronaldo,  all hell breaks loose. We all know that fans can go really crazy at times. And Ronaldo, being popular among young boys and girls alike, has some of the craziest of the lot. They will do anything to stalk him, meet him, touch him, take a selfie with him, or just tell him how much they love him. There are many instances of their madnesses. They have stopped his car just for a peck on his cheeks. They have stalked him to talk to him while he was out for a cup of tea. They have invaded the pitch for a selfie. But, despite everything, the moment they meet their star is something sweet, and worth remembering. Unlike most celebrities, Ronaldo has always been super nice to his fans. Despite their often uncalled for, unpredicted, strange or even creepy behaviours, Ronaldo has behaved politely with them. He perhaps knows that even in his worst times, it is these fans who keep him in the spotlight and give him undying loyalty and support. That’s why, when fans meet Cristiano Ronaldo, something beautiful happens. Moments that are memorable for them is created, moments that they can cherish forever, as Ronaldo acknowledges their love for him.

He probably realizes that he may be a great footballer and has gained his wealth, respect and status by his own skills and efforts, but it’s the fans who have made him a superstar. Ronaldo has millions of followers on social media; a huge chunk or Ronaldo’s income comes from endorsements on social media platforms. Whether he is doing good or bad on the field, there will always be a host of people to support him, and say to the world that they believe in him, that every player has a bad day, and that Ronaldo, the king of football will be back with a bang.