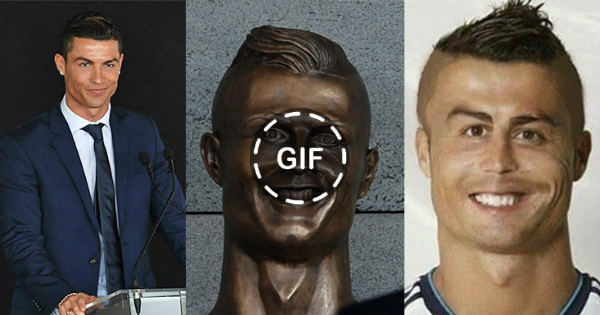 Recently, Ronaldo was showered with an amazing honour: an airport has been named after him. But, more than anything else, it is his statue at the airport that has grabbed the highest amount of attention. The bronze bust of Ronaldo seems to bear no proper resemblance to the player who is noted for his chiselled looks. At best, the statue is a crude caricature of Ronaldo. And, ever since the statue was unvealed, hilarious Tweets, reactions and memes have been flooding in. The Ronaldo statue funniest reactions and Tweets are all over the internet now. Yes, it seems that more than the honour of having an airport named after him or of a statue being placed there, it is the weird statue of Cristiano Ronaldo and its poor structure that have grabbed eyeballs, overshadowing the glory and honour of Ronaldo altogether. It is true that the statue hardly bears any resemblance to Ronaldo. You will be able to understand that it is made with Ronaldo in mind, but that’s about it. But the internet does not forgive mistakes of this kind. It makes sure that the world never forgets such mistakes. That is why, we now have hosts of memes, gifs, and funniest of reactions on Twitter. The sculptor behind the statue has tried to defend himself, and even Ronaldo has spoken about the artist. But, nothing is enough to stop the people. They have found the weirdest of resemblances between the statue and the most ominous characters in films and television. They have been cracking jokes, and honestly, some of them are just hilarious! But, maybe it’s time to give some credit to the artist for his work, and remember that it is the sentiment that counts in this case. If the jokes don’t subside, Ronaldo’s glory will be all stolen.