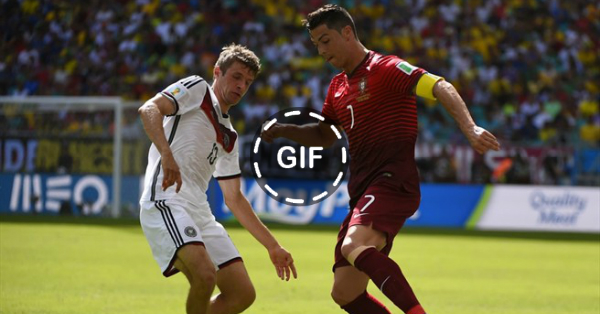 Cristiano Ronaldo is a role model to millions of young stars around the world. He has won awards, trophies and admiration and respect of famous footballers.

His authority is not only recognized by the young footballers but also his fellow professional players. Be it someone from his own team, or from a rival team, Ronaldo’s skills and prowess as a footballer is recognized by everyone in the soccer fraternity. They have never shied away from accepting what a great player he is. Ronaldo’s moves have always served as an example of greatness for young players. How often do we see young soccer enthusiasts trying to copy his moves, be it while scoring the goal or celebrating a victory? But it’s not just the young soccer lovers who consider him an idol. We have seen players trying to copy his style of playing, as well as imitate his celebrations. And added to that list is Bayern Munich star Thomas Muller, as he was trying to copy Ronaldo moves during a training session. The German icon is quite famous in his own way, but is evidently working on improving his dribbling skills to mirror those of the Portuguese star!

Here is a video Thomas Muller during a training session, trying to perfect the moves that the sports world credits to Ronaldo. Enjoy the video, and be awed by what an awesome soccer player Ronaldo is!

Keep visiting ronaldocr7.com for latest and interesting on Cristiano Ronaldo.