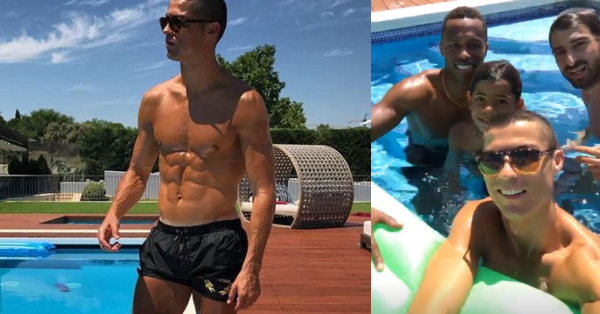 Ronaldo Relaxes with Son amidst Rumours of New Fatherhood

The world is going crazy with the recent reports that Ronaldo has just become a father again; this time, he has had twin babies, born to a surrogate mother. Meanwhile, Ronaldo, rather than confirming or rejecting these reports, has been hanging out and relaxing with his son by the side of the pool.

Ronaldo Relaxes with Son amidst Rumours of New Fatherhood Cristiano Ronaldo just showed off his sculpted body while standing by the poolside. He posted pictures of himself wearing skimpy shorts, while hanging out by his pool at his home. He even gave the caption, “Just relax and enjoy the view.” Several pictures of himself and his son were posted online. These included the snaps in which his son looked just like him; the little boy has received a haircut just like his father!

Ronaldo’s mother, on the other hand, has left home and gone on a mystery trip, if reports are to be believed. This happened just a day before Ronaldo’s twins reportedly took birth. But, there is no mention anywhere by Ronaldo or anyone close to him about the birth of the twins. For several months now, many rumours have been doing the rounds regarding the possibility of Ronaldo having twins, borne by a surrogate mother. Meanwhile, pictures of Ronaldo with his current girlfriend, Georgina Rodriguez, raised newer rumours about her pregnancy, which were straight away denied by Ronaldo’s mother. However, nothing has been said about the twins. Georgina, on the other hand, was noted saying that she will be by her boyfriend’s side and help raise his kids.

Now, the question is, when will the truth about Ronaldo’s twins – a boy and a girl, if reports are to be believed – be revealed? let’s wait and find out!