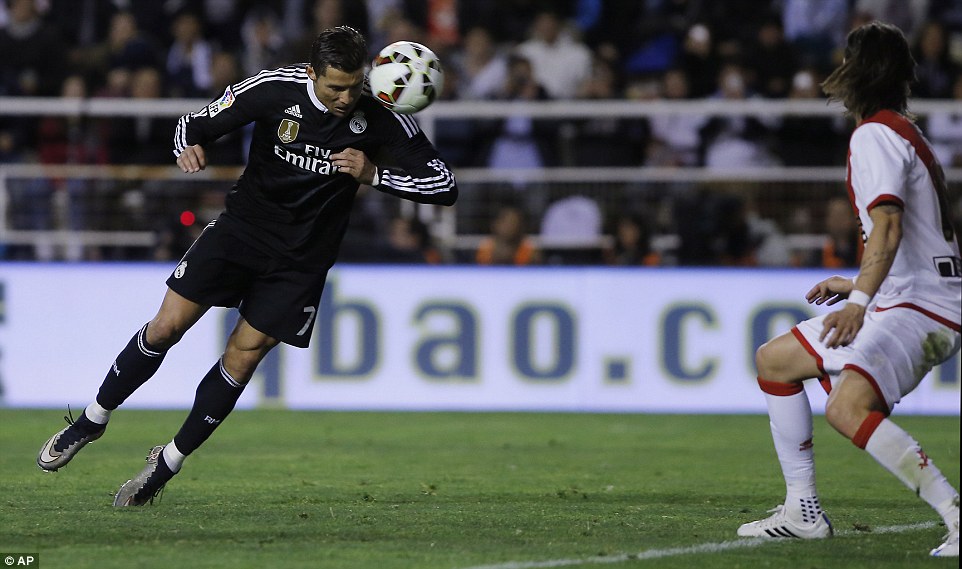 Yet Ronaldo joined the 300 club in just 288 appearances by doing what all forwards should, sending a header downwards and beating goalkeeper Cristian Alvarez, before celebrating with Gareth Bale and his team-mates.
Not only that, the former Manchester United great has scored 99 goals under manager Carlo Ancelotti in just 89 games, following his five against Granada three days ago.

His latest puts the 30-year-old just seven goals behind Di Stefano’s record of 307 in 396 outings, and 23 shy of Raul’s 323 in 741 — with plenty of time to surpass both Bernabeu legends.
Up until his opening goal 22 minutes from time, however, it long looked like Ancelotti would be left as deflated as the balloons that Ronaldo took a disliking to in the first half.

Ronaldo had given four orange balloons that invaded the pitch at the Campo de Futbol de Vallecas a kicking as his team failed to dominate against a team with little left to play for in mid-table.
Rayo in no way had their flip flops on, and fancied giving the winners of La Decima a run for their money. They did just that, proving far more difficult than the Granada side beaten 9-1 on Sunday.
Yet Real’s rotten luck was epitomised by Ronaldo’s yellow card in the 52nd minute, received for diving inside the 18-yard box with the game at 0-0.
He had beaten the offside trap, before cutting inside to shoot, only for defender Antonio Amaya to chop him down. Quite clearly, too.
Replays were not needed to show it was a wrong decision from referee Mario Melero Lopez to book Ronaldo for diving. From every angle, there was no question it should have been a penalty, and Ancelotti will appeal the caution in a bid to have his one-game ban rescinded.
‘I told the referee that everyone saw it was a penalty,’ Ancelotti said afterwards. ‘I told him it was incredible that he didn’t award a penalty and that he showed Cristiano the yellow card. We will appeal.’
The booking lit something in the stomachs of the Madrid players, as Toni Kroos, Bale and Dani Carvajal were cautioned for dissent less than three minutes later before they broke the deadlock soon after.

Some of the Main Facts and Stats (in pics)