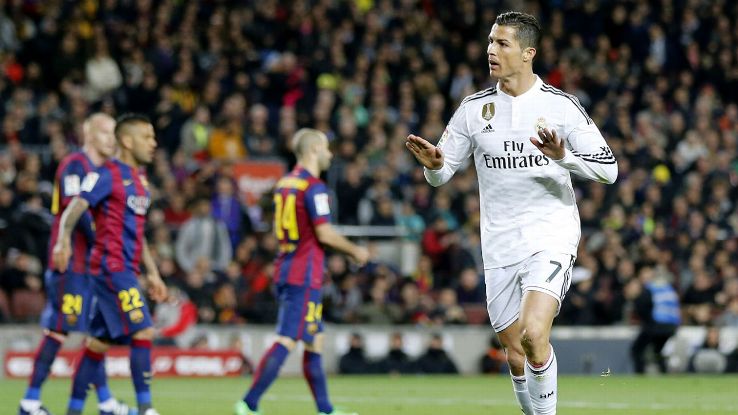 La Liga president Javier Tebas has said Cristiano Ronaldo may face disciplinary action for his celebration after equalising for Real Madrid in their 2-1 defeat at Barcelona on Sunday.

Ronaldo had appeared to urge the Barcelona fans to calm down when he turned home Karim Benzema’s backheel in the 31st minute of El Clasico.

Reuters quotes Tebas as telling reporters: “We have to be careful with provocative gestures by a player when he scores a goal or with any other provocation or conduct that could incite violence among spectators.
“It must be sanctioned, from a fine up to a suspension. We will look into it.”

La Liga authorities have been making additional efforts to crack down on provocative actions during games since the death of a Deportivo La Coruna supporter last year.

In December, the Liga de Futbol Profesional (LFP) reported five clubs — Madrid, Barca, Deportivo, Rayo Vallecano and Granada — due to offensive chanting by their fans, while Barca supporters more recently provoked disciplinary proceedings after chanting “Cristiano is a drunk” during a game.

Tebas, who was speaking at the Security Seminar in Barcelona, added in Mundo Deportivo: “They say La Liga is the best in the world, but for that to be so, we have to be a secure league, that has silenced the cries of intolerance and violence within football.”

Meanwhile, Real Madrid have banned a club member and asked Spain’s commission against violence to investigate two other men after they were seen acting violently and insulting players following Sunday night’s defeat.
Madrid said in a statement that after examining the pictures captured early Monday it had identified a member and thrown him out of the club, banning him from entering the Santiago Bernabeu Stadium or any other of its premises.