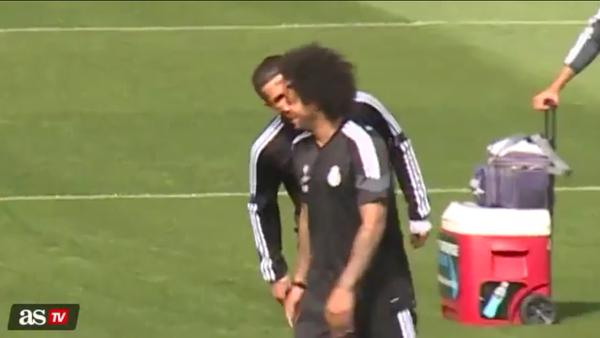 Another day, another Real Madrid star humiliated in training. This time, Ronaldo really made Marcelo feel silly about his embarrassment – and we know why…….!
As a Real Madrid player, getting to train with some of the world’s most skilful footballers every day must be brilliant.

Now, as you can see above, it’s the turn of a more senior member of the squad to suffer the ultimate embarrassment: Marcelo.

Luka Modric uses a little flick to nutmeg the Brazil left-back, who turns away in shame as everyone laughs. But Ronaldo doesn’t leave it there; he rubs it in by giving Marcelo a kiss on the cheek too.

If that seems harsh, we think we know why Ronnie did it. Just look who led the laughter last week when Llorente was embarrassed. Clearly, Cristiano realised karma had decided it was time to bite Marcelo on the bum