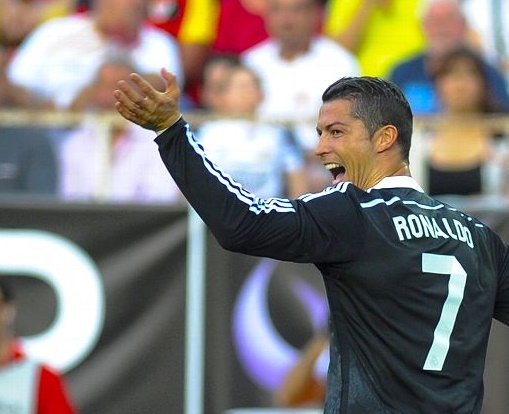 Barcelona’s 8-0 win in nearby Cordoba earlier on Saturday afternoon had added an extra tension to Madrid’s situation. So the pressure was on Madrid here from the start, and even more so on Ancelotti after he again chose centre-back Sergio Ramos in midfield and left the fit-again Gareth Bale on the bench.

After a pretty even opening half-hour in which both teams had their chances to score, Ronaldo appeared to have settled things with two goals inside a minute. But Sevilla got back into the game after a crazy challenge from Ramos gave the hosts a penalty just before half-time. Ancelotti showed his rage on the sideline just as Carlos Bacca converted.

Madrid were limited to playing on the break as Sevilla pressed for an equaliser through the opening stages of the second half. These were nervous times for Blancos fans and Ancelotti alike. But then Ronaldo claimed his hat trick with another pin-point header; Bale provided the expert cross from the right wing just minutes after entering.

As Ronaldo and Madrid’s players celebrated what seemed to be the game’s clinching goal, Ancelotti stepped in among them, gesticulating and shouting in a bit to get the team back focused and organised. It is debatable whether this worked; even with Ramos now alongside Toni Kroos as a midfield pair in a 4-4-2, Madrid were unable to keep the ball and ease the pressure. It was no surprise when substitute Vicente Iborra made it 3-2 with 11 minutes left and Sevilla kept pushing for what would have been a deserved equaliser.

There was chaos late on after Asier Illarramendi replaced Isco. Iker Casillas made a phenomenal stop from substitute Kevin Gameiro, the ball hitting the post in a madcap scramble. In the end Madrid did hold out for what is both a huge win and vindication for their coach’s selections. The Italian had been asked pregame about his record of no wins away at any top-four team during his almost two full seasons in Spain. It was dicey at times on Saturday night, but he has broken that streak now.

Operation 30 points — to win the 10 games since that Clasico defeat — continues to go to plan for Madrid. They have won each of their seven games since, scoring 27 goals while conceding just six. They are doing all they can to stay in the title race, but with three games remaining, Real Madrid still need Barca to slip up.