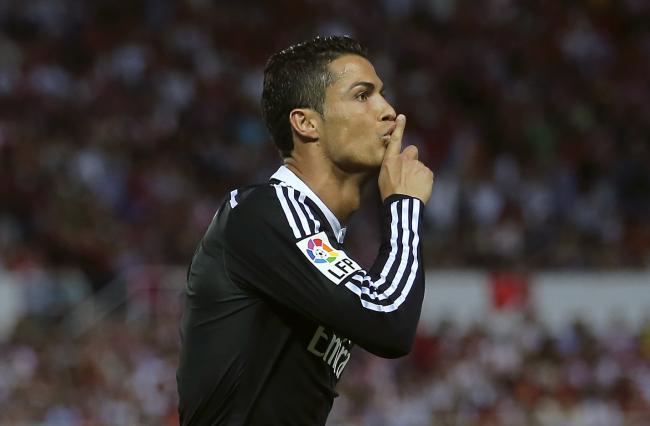 Ronaldo always enjoys himself against the Andalusians. He had scored 18 goals in his 12 previous games against them, including seven in back-to-back 6-2 victories at the Sanchez Pizjuan in 2011. It was his double that led Madrid to a 2-0 success over the Europa League holders in the UEFA Super Cup final last August.

The 30-year-old came into the match on the back of media criticism for the manner in which he had reacted to Alvaro Arbeloa nipping in ahead of him to score Madrid’s third goal in the midweek win over Almeria.

But Carlo Ancelotti had made it clear in his pre-match conference that he, for one, was unconcerned.

“If he has scored so many goals this season, it’s because he has that personality,” he explained. “He always wants to improve and fight to improve.”

And if Madrid felt that a reaction was needed following Barcelona’s 8-0 annihilation of Cordoba earlier in the day, Ronaldo clearly felt that he needed to get back among the goals following a run of just one in the five fixtures leading up to Saturday’s match.
He started the game purposefully, immediately irritating the home crowd by earning himself a free-kick in a shooting position outside the area in the second minute of play. There were huge cheers when he put the resulting set piece over the bar, followed by jeers as he returned to his position.

Further abuse followed when he skied a left-footed effort from the edge of the area on eight minutes. But that would be the last time he attempted a shot from such range.

From then on, the Portuguese focused on getting himself into the penalty area.

The first warning sign for the home defence came just a minute later. Ronaldo made a quick burst in behind Daniel Carrico to meet Marcelo’s good cross and force an excellent save from Sergio Rico in the home goal.

Sevilla were playing some very good football, with Jose Antonio Reyes rolling back the years in a superb display. But they did leave space for Madrid to exploit on the counter-attack and looked vulnerable when they away side made progress down the flanks.

Ronaldo again got ahead of Carrico inside the area to meet a low cross from Javier Hernandez in the 27th minute but was just unable to provide a finishing touch under heavy pressure.
He did not, however, have to wait long to break the deadlock. With Sevilla’s Grzegorz Krychowiak off the field receiving treatment following a nasty clash of heads with Sergio Ramos, Madrid took full advantage of their extra man to take the lead.

Isco lifted a high cross into the area from the left and Ronaldo twisted this way and that to flummox his marker before meeting the ball with a well-judged header back across goal.

Just a minute later, he scored his and Madrid’s second. Rodriguez flipped a cross into the area from the right, Hernandez flicked it on and Ronaldo reacted quickest to beat Diogo Figueiras to the ball and prod it in ahead of the goalkeeper.

Sevilla reduced Madrid’s advantage to one on the stroke of half-time when Carlos Bacca converted from the penalty spot after a silly foul from Ramos. And the home side began the second half strongly, putting their visitors under concerted pressure.

But Madrid gradually regained a little control with a few spells of good possession. And they then restored their two-goal lead with 20 minutes left to play.

Gareth Bale had replaced Hernandez in the 66th minute, and it was the Welshman who provided the assist. He manoeuvred himself into a crossing position down the right and delivered a high ball toward the far post. Ronaldo peeled away from Figueiras and aimed a perfect header back over Rico to complete his treble.