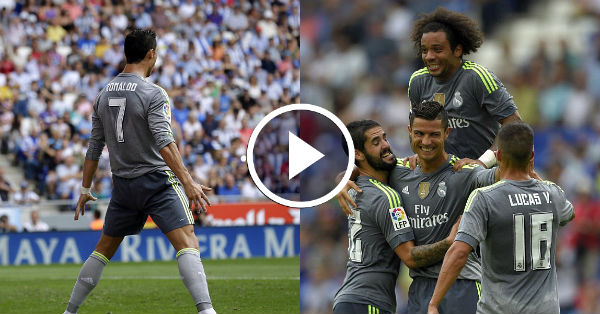 Ronaldo, with his as usual charm, proved his legacy by scoring 5 goals for his team Real. As the whole media continuously criticizing CR7’s goalless season start, his coach Rafa Benitez backed him up before tonight’s clash. And Ronaldo on the other hand proved his club right by displaying his marvelous skill on ground.

Cristiano started his goaling saga in the 7th minute of the match and in 17th minute got his penalty chance which he also scored tremendously well. He scored his hat-trick even before the halftime while his teammate Karim Benzema also scored with Ronaldo’s assist. After the whistle of the second half kickoff, CR7 again started showing his magical skills and legendary visions which made the whole stadium go crazy for him. He scored again in 61th minute and in 81st minute as his Real Madrid finished the match by 6-0.

Here goes all the five goals of Cristiano Ronaldo in his La Liga clash with RCD Espanyol. Cristiano Ronaldo Hat-Trick vs Espanyol will take its own integral part of the LigaBBVA history as Los Blancos trying to prove them the best in the ongoing season. Ronaldo, besides his own goals, also proved the media wrong by assisting Krim Benzema’s goal.

Due to this amazing victory on 12th September, Real Madrid is clearly taking a lead to the La Liga table of season 2015-16. So it will just be a matter of time when Ronaldo can lift the Spanish cup for his white brigade. And about the best player of La liga? Now, its clearly dominated by CR7, isn’t it?

Watch the amazing video of Ronaldo’s hattrick and dont forget to send us your views on his performance. Happy watching.