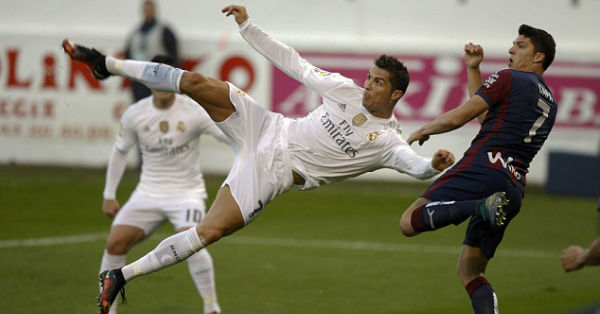 Cristiano Ronaldo has reached to his peak?

Guillem Balague believes Real Madrid winger Cristiano Ronaldo has reached to his peak and needs to adopt striking role, if he wants to prolong his career.

Cristiano Ronaldo’s  physical strength is diminishing with the time, as former Manchester United star has reached to his peak, according to Spanish football expert, Guillem Balague. Sky Sport pundit suggested Real Madrid top scorer should adopt to the central striking role, as it help him to reassert his influence and will also benefit him to prolong his professional career. Cristiano Ronaldo netted his 16th goal of the season against Eibar in Real’s 2-0 win over from the spot kick, however he was guilty of missing of some glorious chances, which had finished the business for Rafael Benitez’s men.

While commenting on Portuguese International performance Guillem Balague emphasized that the reason behind Cristiano Ronaldo’s decreasing influence is because  he has reached to his physical peak. And it is result of extra work he put in gym. “I think Ronaldo is going down physically, he has peaked. “He has demanded lot of his body from very early on.

“He went to the gym a lot when he didn’t need to. He was self-learning as he was going along which perhaps meant he overexerted himself with weights, something he perhaps shouldn’t have done.

“You see his body is not the body of a football player and he has constant pain in his knees. With that comes less practising from set pieces.

“He has scored only two goals out of the last 92 set pieces he has taken, that’s not good enough, not for him anyway.”

“At the moment, there doesn’t seem to be spark in his game, he’s lost his pace, he doesn’t beat players anymore and, in the No 9 position, he’s not enjoying himself and that makes him less effective.

“He can still convert into a super striker, he just needs to accept the role.”