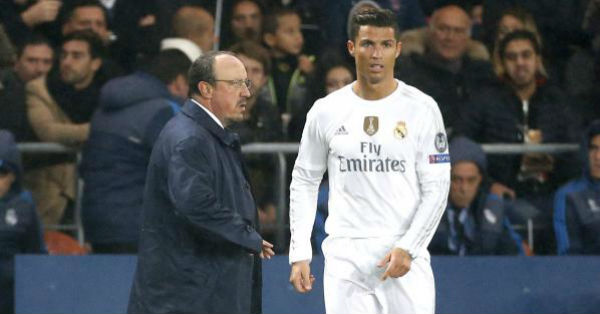 Why Rafael Benitez is happy with Cristiano Ronaldo display despite of missed chances?

Rafael Benitez is convinced with Cristiano Ronaldo display in Real Madrid 2-0 victory over Eibar on Sunday, despite of his missed chances.

Cristiano Ronaldo, who scored for the visiting side from the penalty spot, missed a couple of opportunities before the break.

However, Real Madrid head coach refused to criticize Portugal international for his inability to finish off easy chances and said he is happy with the performance of his star-striker.  Cristiano Ronaldo ended his three games goalless streak in the Champions league against Shakhtar Donetsk on Wednesday, after failing to score in Real Madrid previous three encounter  including El-Clasico. “Ronaldo got his goal again. He got a number of chances and I am pleased with Ronaldo’s performance.

Former Liverpool boss hailed the unity of his team, amid the reports of unrest inside Real Madrid’s dressing room. Rafael Benitez’s side back to the winning ways,after losing two league games in a row.

“Everybody played a role in this win. We all worked hard I want to emphasise that it was a team effort. We were all united.” Defeat against Barcelona left Real Madrid 6 points adrift from the top La-liga standing. Rafael Benitez’s men are in the third place with 27 points, after 13 games has been played, but Real Madrid manager insisted that still there is plenty of Football to play.

“It is only November and we have had a lot of injuries. I am optimistic,”

“We will continue to fight in each game right until the end of the season.”

While Benitez revealed Gareth Bale’s goal was the result of extra practice in training.

“The first goal was the result of something we have been training on.

“Eibar are an aggressive and intense team, but we deserved our in. We have proven to be a tough group.”