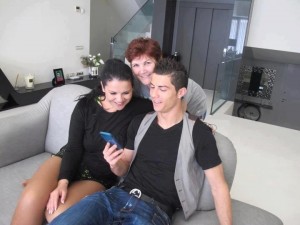 Cristiano Ronaldo dos Santos Aveiro, the captain of the Portugal national team and forward player of Real Madrid has shown the world the talent he has. Cristiano Ronaldo was born to Maria Dolores dos Santos and Jose Dinis Aveiro. He is the youngest of his family having two elder sisters and a brother. Very few of his fans know about his personal life and are always interested to hear about it. Here you will find the complete information about Cristiano Ronaldo’s family. The football superstar was born on a small island in Funchal, Madeira in Portugal. He had to face many hardships in his early life. He was brought up without the materialistic luxuries but with a lot of love and affection. His father Jose Dinis Aveiro was a gardener and hardly made a living. It was him who named Ronaldo as he was inspired by the former US President, Ronald Reagan. Ronaldo’s father was a drunk. Sometimes he used to drink a lot that it eventually caused him alcoholic liver disease and he died of it in 2005 when Ronaldo was twenty years of age. This is one of the reasons why the soccer star, Ronaldo decided not to drink.

Cristiano Ronaldo’s mother, Maria Dolores dos Santos Aveiro used to work to run their home. She used to do cooking and cleaning for others. This way she fed her children and brought them up. Ronaldo grew under the love and care of his mother. It was his mother who persuaded him to fulfill his dream of becoming a footballer. Thus, his mother gave him the direction and made him the incredible player he is today.

Cristiano Ronaldo likes to spend his time with his family but he talks very little about them in media. He once said,

Ronaldo has an elder brother, Hugo Aveiro. Ronaldo helped him get rid of drugs by standing by his brother. Both share a pleasant relationship. Hugo runs a construction business in Fugal. He is also the director of the “Museu CR7”, the museum that holds Cristiano Ronaldo’s awards and trophies as it was Hugo who proposed the idea of a museum. Cristiano Ronaldo has two elder sisters, Liliana Catia Aveiro and Elma Aveiro. His sister Catia, oftenly called Ronalda pursues a musical career. She was supported by the international football star to settle her in musical career. Both the sisters run a clothing business as well. Ronaldo became a father to a son in 2010. He has the exclusive custody of his son, Christianinho. His son follows him on his good looks. Cristiano Junior lives in Spain with his grandmother and father. He is taken care of by his grandmother.

Ronaldo spends his holidays with his family and tries to make the most of his time. Ronaldo is not only a tremendous football player but also a family man. read some more amazing facts about CR7 here.