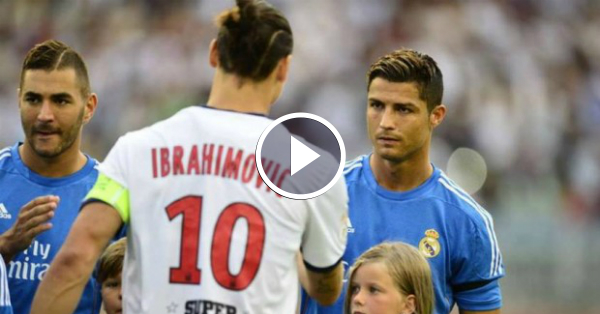 We all hear constantly about the Ronaldo vs Messi comparisons. These two players two players are undoubtedly among the greatest footballers at the moment. But, Messi is not the only player who is considered as Ronaldo’s equal. There are some other players who are pitted against him, and one of them is Zlatan Ibrahimovic. Relief for all Real Madrid fans who could not bear the departure of their hero Cristiano Ronaldo, the striker is finally settled in the club. The rumor that kept sending the shockwaves through the hearts of majority of Los Blancos camp i.e. Cristiano Ronaldo’s possible move to PSG, is almost impossible this season. Though the striker himself has been insisting for time and again that he is happy at Real Madrid but a strange uncertainty was always added up in the phrase saying nobody knows the future. Cristiano Ronaldo is not joining PSG or at least not until the end of this season. PSG has been trying their best in the summer to get Cristiano however now they seem giving up. The club president Nasser Al-Khelaifi has dismissed the rumors that the club is in talks with Real Madrid over the striker. “At the moment, Ronaldo is a Real Madrid player. He still has two-and-a-half years to go on his current contract,” El-Khelaifi told Le Figaro. “I maintain an excellent relationship with Real Madrid president Florentino Perez. We have not held talks over Ronaldo. He is obviously a great player, but we already have some great players in our squad. Angel Di Maria is one of them. I am very satisfied with our current squad.” The French champions are currently in great form led by Zlatan Ibrahimovic and Angel Di Maria. However the hunt for the French giants will began once Zlatan’s contract with the club expires and that is at the end of the current season. Cristiano Ronaldo’s high demand by PSG was probably due to the reason that there is no chance in Zlatan’s contract extension with the club. Cristiano Ronaldo could have been a perfect replacement of Zlatan Ibrahimovic alongside Di Maria and Cavani however the transfer storm is getting pacific at the moment. Here are some of the most impossible goals scored by the two living legends of the world of football – Cristiano Ronaldo and Zlatan Ibrahimovic! Let’s take a look!