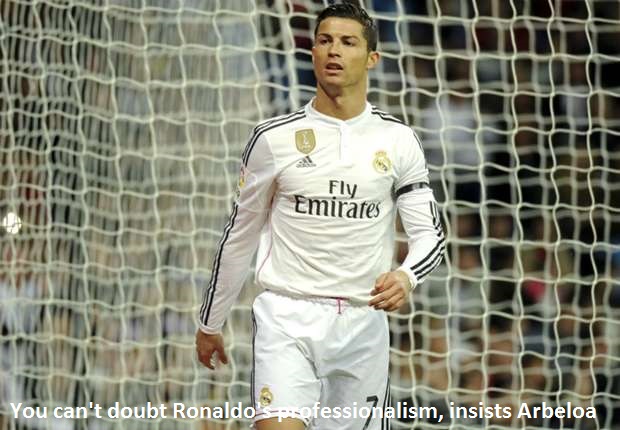 The full-back has defended the Portugal international and Gareth Bale against criticism, while stressing that he will not leave following the signing of Danilo

Real madrid defender Alvaro Arbeloa has hailed Cristiano Ronaldo’s professionalism and believes the prolific attacker is entitled to be unhappy with his treatment in recent months.
The Portugal international was criticised after holding a birthday party in the wake of Madrid’s 4-0 Liga loss at the hands of Atletico Madrid back in February, before question marks over his attitude appeared following recent ill-tempered performances.

Arbeloa, however, has now moved to defend his team-mate and says he has every right to feel aggrieved.
“People have been unfair toward Cristiano Ronaldo. Nobody can doubt his professionalism,” Arbeloa told El Chiringuito de Jugones.
“He has every right to feel that he was treated unfairly.
“Cristiano’s commitment cannot be matched. He is always the first on the training pitch and looks after himself at home.
“Real Madrid’s history is marked by Alfredo Di Stefano and by Cristiano Ronaldo. I do not know how long it will take before Madrid see another player like him.”
The defender also had his say on Gareth Bale’s situation at Madrid after his treatment at the hands of some supporters.
“Bale had a spectacular first season at Madrid. I do not know why people are obsessed with him like this,” he said.
Arbeloa’s position at Madrid could be under threat following the arrival of Danilo from Porto in June, but the full-back has no plans of leaving just yet.
“The signing of Danilo was great news for Madrid. He is a very good player, who had attracted the interest of some of Europe’s best teams.
“A club like Madrid always have the best players and will never stop trying to improve.
“I do not see his arrival as a sign that I can leave. I know that I will not be as happy elsewhere as I am at Madrid. I want to stay here.”