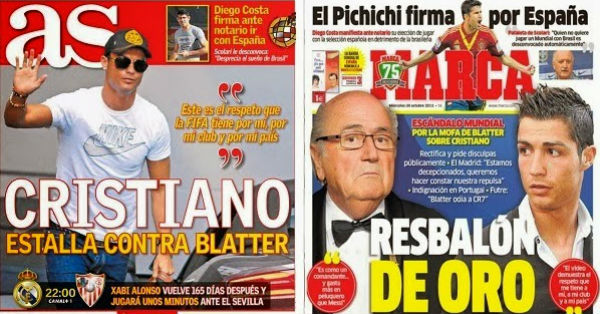 In the wake of Los Blancos utterly disappointed defeat in the first el-clasico of the season 2015-16, local press has put blame on  Cristiano Ronaldo’s shoulder and also question his ability to perform in big games.

Marca suggested that Portuguese International has failed to turn up in the big games of current campaign so far.

The Madrid based newspaper quoted: “Cristiano Ronaldo, the only Real Madrid player, who has featured in the every game of the season, has scored only three goals in eight games. He is the guilty for not turning up in any of Real Madrid’s big games the season. He was poor and failed to live up to exceptions against Paris Saint-Germain, Sevilla and Barcelona.” Interestingly, Marca is working very closely to Real Madrid president Florentino Pérez.  It is not the first time that newspaper has criticized Cristiano Ronaldo, but  for the first time they have gone so blunt, while commenting against Real Madrid top scorer. There is feeling inside Santiago Bernabéu, that  Cristiano Ronaldo is no more wanted man at the club and  Florentino Pérez is trying to force him out of Spanish Capital. While as per English newspaper Independent, Cristiano Ronaldo wants to leave Real Madrid if current boss Rafael Benitez remain in charge beyond the season 2015-16. The three times Ballon d’Or winner has  grown frustrated with the defensive setup and think his recent dip in form is down to the former Liverpool manager tactical approach.  And if reports to be believed Cristiano Ronaldo has question the mental strength of  Rafael Benitez to lead Real Madrid to the trophies, and warned Florentino Pérez that ‘club will not win anything under Benitez.

Cristiano Ronaldo was against the sacking of previous Real Madrid manager Carlo Ancelotti.