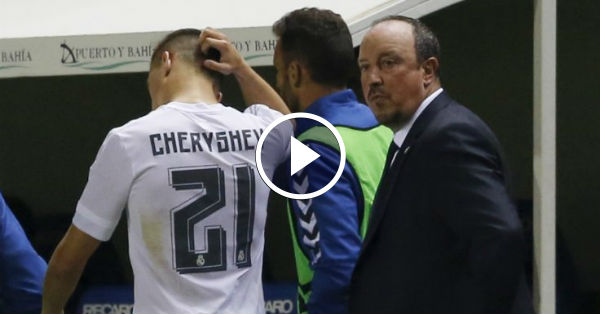 Why Real Madrid could be thrown out of Copa Del Rey?

Real Madrid could face shock expulsion from the Spanish Cup, after fielding the ineligible Denis Cheryshev in their 3-1 win over Cadiz.

Galácticos made a huge blunder by selecting Russian international Denis Cheryshev, who was serving suspension after receiving three yellow cards during his loan spell with Villarreal last season.

Cadiz has reported against Real Madrid to the Spanish Football Federation, as a result Spanish giants could be thrown out of the competition.

To make the situation even worse for Rafael Benítez’s side, Russian winger scored the opening goal for the visiting side, however, he was taken off when Real Madrid became aware of their horrendous error. Rafael Benítez confirmed that he withdrawn the player, after realizing the error as a sign of good faith. The former Liverpool boss said. “Clearly, the club did not know anything. We weren’t told by Villarreal or the RFEF. We knew nothing and [when we found out] we have substituted the player We decided to do this with a heavy heart, but it is our firm decision. We do this not without a sense of pain, because we are friendly with the club. We read the report, evaluated the situation and weighed up our decision. I think we’ve acted responsibly to show good faith.” “This situation required a speedy decision because there was no time to speculate. The board has met and decided to report Real Madrid for fielding an ineligible player, out of respect for our fans and the club.

“I spoke with people from Real Madrid during the match and nobody said anything about it. We’ve looked at the rules and made a decision accordingly, but it was a tough one to make. Real Madrid are a great club, admired all over Spain, and by me.”