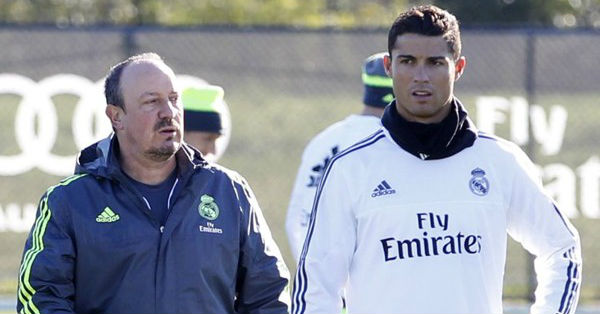 Why Rafael Benítez has backed Cristiano Ronaldo to return to form

Real Madrid manager has tipped Cristiano Ronaldo to return to form and hailed him as fundamental player, ahead of Saturday’s El Clasico.

The Portuguese International has failed to score in last two games against the Paris Saint-Germain in the Champions League followed by abysmal display in 3-2 defeat at Sevilla, where he couldn’t find the net. Cristiano Ronaldo has been hugely criticized for his recent displays, as he seemed isolated amid alleged transfer talk linking him away from the Spanish Capital.

Prior to Cristiano Ronaldo’s goal scoring drought, the Real Madrid all time scorer netted a goal in the fixtures against Las Palmas and Celta Vigo. A defeat at Sevilla before going into the International break has ended their unbeaten run in all competitions, while Barcelona has taken full advantage of Real Madrid slump to reclaim their place at the top of the table since September. Los Banos cannot afford to lose two league games in the row, with defeat in the hands of El Clasico rivals will send Barcelona six points clear at the top of the table after the 12 games of the Spanish top flight.

Rafael Benítez has backed  his star man Cristiano Ronaldo to return to form and he is convinced that current holder of the Ballon d’Or will make the difference on Saturday.

” Cristiano is a fundamental player, he has the capacity to score lot of goals, he has my absolute confidence that he will score lot of goals and he is a guarantee and he will do that. However, he does it I don’t care. The  most important thing is that he feels comfortable, that he gets forward and scores.” While good news for the Real Madrid is that French International Karim Benzema is fit to start against the Barcelona.