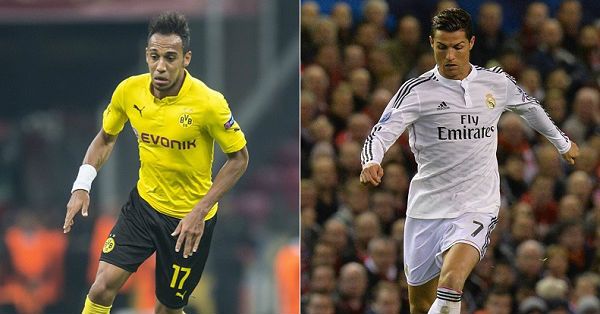 Pierre-Emerick Aubameyang the in form striker of Borussia Dortmund striker said he is aiming to become as prolific as Cristiano Ronaldo.

He also said that his new target is 50 goals every season.

Barcelona’s Lionel Messi, who scored 50 in the 2011-12 La Liga campaign, is the only Golden Shoe winner to have exceeded Ronaldo’s tally but Aubameyang told L’Equipe: “If someone like Ronaldo can get 50 goals in a season then why wouldn’t I be capable?”

The Gabon international said he intends to become a world-class attacker.

He said: “That’s the aim. It always was. I haven’t always said it but now I can talk about it since the statistics are with me. Maybe before I would not have been taken seriously, but today I can say it — it’s been the goal for a while.”

Prior to the season, Aubameyang had announced that he wanted to score 20 goals over the course of the season, but the striker said new BVB boss Thomas Tuchel gave him a different target.

“I announced that I wanted to reach that mark, but the coach was hoping that I was going to score a certain number of goals,” he said. “He gave me a sheet of paper with the total in question on it and every time that I score I have to tick it. What is the total? You’ll see at the end!”

Aubameyang, who joined Dortmund from St Etienne in 2013, added that he knows he is “able to achieve something big” if he continues to work on his flaws.

“I said a few years ago that one day I would like to score around 40 goals [in a season],” said Aubameyang, who has scored 13 of his 20 goals in the Bundesliga.

“I’m working for that. At the moment I’m in the process of taking a very big step. It’s coming with confidence over the years. I’m 26 now and I’m realising a lot of things.”

Aubameyang was initially used on the wing at Dortmund while Robert Lewandowski was at the club, but former BVB boss Jurgen Klopp eventually moved him into a central role after the Poland international left for Bayern Munich in 2014.

“It goes without saying that that’s where I feel the best,” he said. “I maybe have less efforts to accomplish than when I play on the wing. That allows me to have a little bit more energy to finish off moves.

“Deep down with myself, I knew that my best position was through the centre, and I found a coach whose given me the chance to have stability in this role.”

He added: “Last season I started out on the wing but Jurgen Klopp realised that I could bring even more through the middle. And, with Thomas Tuchel, we’ve followed on from that.”

Barcelona’s Lionel Messi, who scored 50 in the 2011-12 La Liga battle, is the main Golden Shoe champ to have surpassed Ronaldo’s count however Aubameyang told L’Equipe: “On the off chance that somebody like Ronaldo can get 50 goals in a season then is there any valid reason why i wouldn’t be able?”

The Gabon worldwide said he means to end up a world-class aggressor.

Dortmund have been productive as of late in the wake of recuperating from the poor frame that left them battling assignment for an expansive segment of Klopp’s last season.

Marco Reus, Henrikh Mkhitaryan and Aubameyang have contributed 40 of Dortmund’s 61 goals between them, yet just Neven Subotic and Sokratis Papastathopoulos have neglected to score or help an objective among the dynamic individuals from Tuchel’s side this season.

Taking into account current structure, Borussia are anticipated to score 96.32 goals before the winter crush and have hit the spirit of the net in each of their last 29 games, last experiencing a mental blackout in April’s 1-0 rout at home to Bayern.