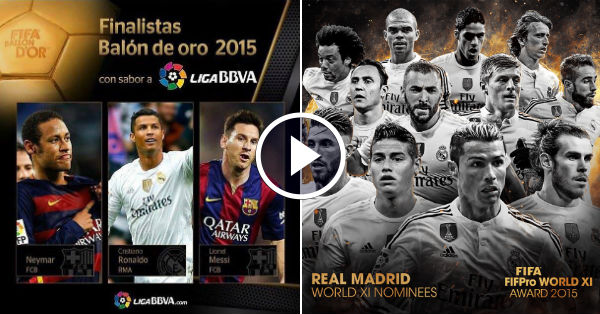 Why Lionel Messi is not happy with Cristiano Ronaldo’s Ballon d’Or nomination?

FIFA released the three Ballon d’Or nomination for 2015 on Monday, Lionel Meesi earned his ninth straight selection for the Football’s biggest individual award, along with  Cristiano Ronaldo  and Neymar.

The Nominations of Barcelona Players in Final Three:

The Argentinian International has formed one of the most lethal attacking partnership with former Santos man and  Luis Suarez in the history of Football, with Barcelona winning Champions League, La-Liga and Copa Del Rey last season. The attacking trio has combined to score 125 goals in a Calendar year, as Catalans are the top of the league standing in current campaign. Lionel Messi acknowledged that Cristiano Ronaldo have done well, but he believes Luis Suarez should have considered for final Ballon d’Or nomination. The Argentina Captain was hoping to share  Ballon d’Or podium with Neymar and former Liverpool striker.

Ahead of Ballon d’Or gala January Lionel Messi claimed couple of another awards by winning the best player of the La-Liga, and best striker for season 2014-15 on Monday, after the Ceremony he expressed his views over Ballon d’Or nomination. “I’d have liked to be on Ballon d’Or podium with Suarez and  Neymar.”

“Luis deserved it because of the season he had. You have to credit Cristiano as well, who also deserved it. We’ll have a good time.”

Lionel Messi dedicated the awards to his son, Thiago.

The Barca attacker thinks that after the splendid 2014-15 campaign, he and his teammates deserves recognition.

“I am grateful for these awards – after the season the team played, we deserved some recognition, maybe even a little more.”