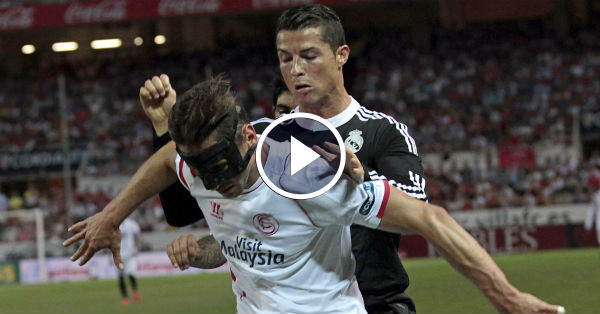 Why Krychowiak is Furious at Cristiano Ronaldo record?

Grzegorz Krychowiak has said he was furious when he learnt about impressive Cristiano Ronaldo record against Sevilla.

Real Madrid traveled Ramón Sánchez Pizjuán Stadium with unbeaten run in all competitions, but night turned sour for the visitors as Sevilla condemned  to the first defeat of the season, which see Real Madrid losing their status at the top of table.

Sergio Ramos provided Real Madrid a goal advantage with his acrobatic strike, despite of their poor start of the game. But Los Banos surrendered their lead with Ciro Immobile strike brought the hosts on the level terms, with Ever Banega and Fernando Llorente goals made life difficult for Rafael Benítez’s men on miserable evening. While James Rodriguez goal was too late for any potential comeback. Cristiano Ronaldo was anonymous for the whole game as Real Madrid failed to stamp their authority on the game. Grzegorz Krychowiak revealed he made it sure that three times Ballon d’Or won’t get any joy after hearing about Cristiano Ronaldo record against his side. “When I read that Cristiano had scored 19 goals against Sevilla, I was furious. I went on the pitch like a bull foaming  at mouth.

“I repeated to myself that ‘it is impossible he will score again. Last year he scored twice against us when I was out with broken nose but this time I could stop him.

The Polish midfielder was the captain of his side against Real Madrid, he reassure being a Captain did not change approach about the game.

“I didn’t feel the pressure at all. It was an honour but it didn’t change the way I play.

“I’m growing as a player in La-Liga, which is most demanding league for the defensive midfielder like me because we can’t look what is happening behind us.”