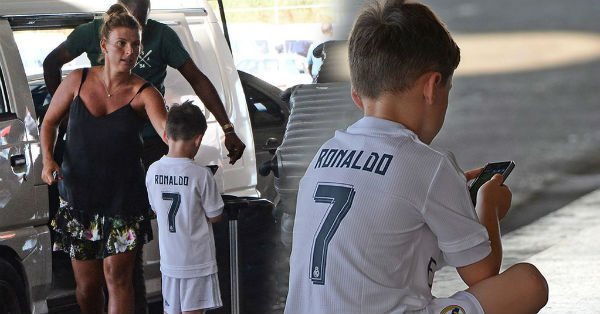 While Manchester United Captain is on the club duty, his wife and two sons were on holiday with family in Barbados. Instead of wearing his dad replica shirt,Kai choose to go with Real Madrid strip. The five year old spotted wearing Real Madrid outfit with Cristiano Ronaldo name back of it at Grantley Adams Airport. Wayne Rooney has two sons named Kai and Klay , since their father is a footballer both are the massive football fans. Kai is a big fan of his dad’s former teammate at Manchester United. Last season, Kai  was with his father Wayne Rooney on the pitch after United 1-1 draw against Arsenal in their final home game of the season. To everyone’s surprise, Kai was spotted with a temporary tattoo on his arm of Real Madrid all-time top scorer Cristiano Ronaldo. The Portuguese International formed a formidable partnership with Wayne Rooney during his time at Old Trafford, winning Premier League, Champions League and Cup. The Real Madrid star recently praised Wayne Rooney and admitted he would love to play again with him.

“May be we will play again together” While featuring in  BBC documentary Wayne Rooney – The Man Behind The Goals, Cristiano Ronaldo confessed that his misses playing along with England striker.

“The power of Wayne Rooney is his  mentality and his strength, he is real hard worker, he never stops, He is fantastic team player and he scores goals. Cristiano Ronaldo added.

“We won every trophy, the Premier League, the Carling Cup, the Champions League.

“He is fantastic guy and he helped me lot when he came to join us in Manchester.

” I really miss playing with him. May be in the future we play together.”

In the documentary,  Rooney told that Kai wants to be footballer, however unlike his idol  Cristiano Ronaldo he wants to be goal-keeper.