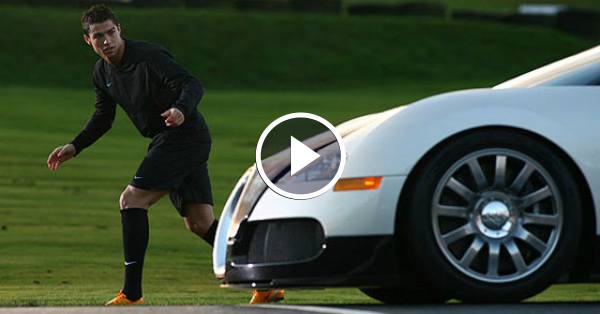 Cristiano Ronaldo is one of the biggest soccer stars in the world. He is popular for more than just his skills with the ball, though; he is is more than just a soccer player. He is a man with a body to die for, fitness that can inspire everyone to hit the gym, and diligence to remain in shape that’s hard to get even in the best of players. So many athletes have been known to destroy their lives because of addictions and other horrible habits. Ronaldo keeps himself away from all that. But, some things are gifts just gifts. And the Ronaldo Race Against Bugatti Veyron proves just that.

Ronaldo has some amazing qualities, like speed, vision, etc. He took a series of tests to prove these, and the test not only proved his stunning vision, but also other aspects, including his speed, not that anyone had questions about his agility. On the field, Ronaldo moves like the wind, chasing the ball up and down the field from the beginning till the end, showing bewildering stamina and strength.

Cristiano Ronaldo is widely regarded as the fastest footballer of all time, and is known for his agility. His super-fast speed is complimented by his amazing leg-muscles which he flaunts without any hesitation, during his marvelous goal celebrations. In this video, Cristiano is competing against one of the speediest cars of the planet Bugatti Veyron, which is noted as one of the fastest cars in the world. It is the race between a man and a machine, a race between a footballer who is often compared with the Lightening Usain Bolt and a 1,184 bhp mean-machine, supercar Bugatti Veyron.