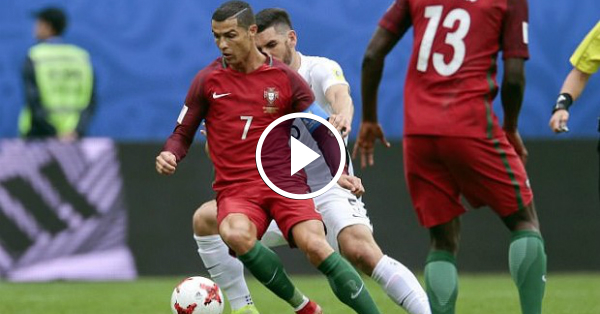 A mind blowing performance by Cristiano Ronaldo vs New Zealand. As he scored his 75th international score to set another record.

Portugal drifted to a 4-0 prevail upon New Zealand in St Petersburg and secured their place in the semi-finals of the Confederations Cup. Commander Cristiano Ronaldo put Portugal ahead from the penalty spot on 33 minutes.

Bernardo Silva – who has joined City from Monaco for £43million – quickly multiplied the lead with a short proximity complete, yet in doing as such landed fumblingly on his lower leg and was taken off at half-time. Forward Andre Silva wrapped up the agreeable triumph with a wild calculated complete on 80 minutes and Nani included a fourth in stoppage time. New Zealand, the OFC Nations Cup victors, had made a positive opening with Leeds forward Chris Wood seeing his shot spared.

Ronaldo had shaken the crossbar before Ipswich defender Tommy Smith packaged over Danilo Pereira in the case following a corner. The Real Madrid star ventured up to score his 75th international goal from the penalty spot.

It was soon 2-0 to the European champions when Bernardo Silva changed over a low cross from Eliseu following 37 minutes. Be that as it may, the attacking midfielder turned his lower leg as he arrived in front of a sliding test from Tom Doyle, which saw him supplanted by Luis Pizzi after the break. Be that as it may, the All Whites manager could do little when Silva, who AC Milan marked from Porto for £35million, shot into the privilege of the punishment territory before slamming the ball into the top corner.

Valencia star Nani, who went ahead for Ronaldo, at that point included a fourth in stoppage time. The former Manchester United man made space for himself with a cunning stride over before penetrating home a low drive to seal Portugal’s way to the Confederations Cup semi-finals.