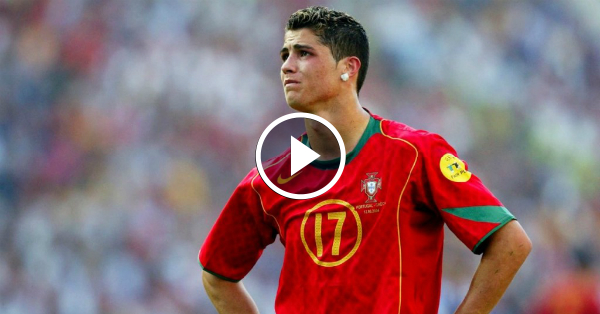 Cristiano Ronaldo began his youth career in 2001. He displayed his spark at a younger stage. There are many excellent skills by young Cristiano Ronaldo for Portugal to get admiration from the sports pundits.

Apart from the under-15 team for Portugal, he also represented the under-17, under-20, under-21 side. And under-23 national sides, gathering 34 youth caps and hitting 18 goals in overall competitions.

He served his country at the 2002 UEFA European Under-17 Football Championship stage. Where they failed to proceed past the group stage. Cristiano Ronaldo also highlighted in the Olympic squad at the 2004 Summer Olympics. Scoring one goal in the competition, though the team was eliminated in the first round. And finishing bottom of their group with three points after losses to future semi-finalists Iraq and quarter-finalists Costa Rica.

And he scored his first international goal in a 2–1 group stage loss to the champions Greece. After turning his penalty in a shootout against England at the quarter-final stage. Cristiano Ronaldo helped Portugal enter the final by scoring the first goal in a 2–1 win over the Netherlands. But the decisive last match ended in a 0–1 defeat. Cristiano Ronaldo was featured in the team of the tournament, having contributed two assists in addition to his two goals.

Cristiano Ronaldo was the second-highest goal scorer in the European qualification for the 2006 FIFA World Cup with seven goals. During the competition, Cristiano Ronaldo scored his first World Cup goal against Iran with a penalty kick in Portugal’s second match of the group stage.