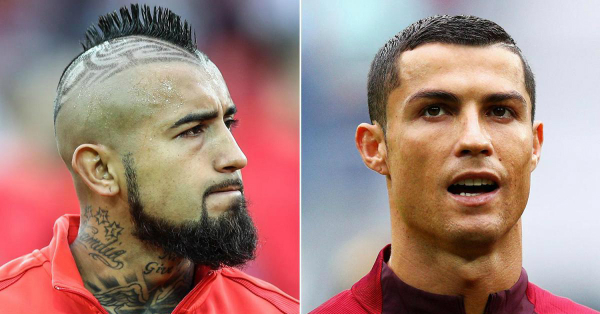 Chile’s Arturo Vidal was earlier reported to have slammed Ronaldo by calling him a smart-ass. But, it now seems that this was all a big misunderstanding. Apparently, Vidal did not call Ronaldo a “smart ass,” and, as confirmed by Chile’s press secretary, it was all a big mistake of reporting, as there was a translation error that led to the incorrect headlines. On Sunday, Vidal had spoken to reporters in Moscow after Chile had a 1-1 draw against in Confederations Cup in their match against Australia. They found a place in the semifinal after their encounter against Australia, and the team will have a clash against Ronaldo and his boys. Reportedly, Vidal, who also plays as the Bayern Munich midfielder, had also said that there is no ‘cuco‘ in Portugal, when the reporters questioned him about Ronaldo. Now, this remark by Vidal could go on to mean “one to fear” in Chilean Spanish, or to “crafty” or “sly” in Castilian Spanish. Now, German papers used the term “Schlaumeier,” while reporting this, to mean “wise guy”. This became “engreido” in the Spanish reports, which could translate to “bumptious”, “vain”, “spoilt brat”, “big-headed” or “arrogant”. Various newspapers published different kinds of headlines, based on this. For instance, the headline by Spain’s Mundo Deportivo read, ‘Cristiano Ronaldo is a spoilt brat, he doesn’t exist to me.’ From there, things started to get out of control. A headline in English said, “Cristiano Ronaldo is a smart a** … he doesn’t exist to me.” But, while speaking to ESPN FC, Chile secretary Maria Jose Vasconcelos called these statements false. She further added that whatever remarks Arturo Vidal made about Ronaldo were in the mixed zone, and the reporters asked if Vidal was scared of the ‘cuco’.

She further said that Chile did not have any press activity on Monday. On Tuesday, however, it was just coach Juan Antonio Pizzi and Marcelo Diaz who spoke during a press conference.