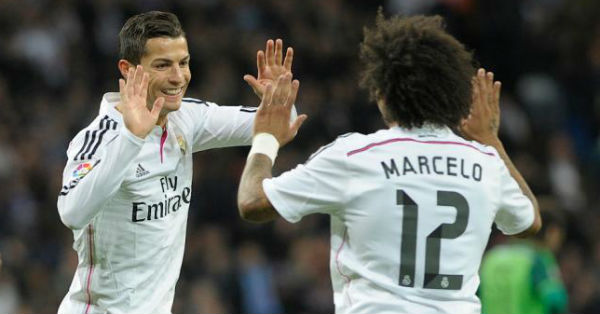 Three points are more important then scoring a goal  – Marcelo

Real Madrid full back Marcelo believes getting three points against Levante was most important, while admitting he enjoyed his goal.

Marcelo opened the scoring for the home side and Cristiano Ronaldo scored second, with Jese Rodriguez’s  strike  sealed 3-0 victory for Rafa Benitez side after back to back draw against Malaga and Derby rivals Atletico Madrid. The International break haven’t done any favour to Real Madrid with number of key players picking up injuries while playing for their National side. But Marcelo is happy with the performance of his team.

“I am happy with my goal but the most important thing was to pick up three points. “It is very difficult because they are a lot of injured players, but we have to play for National times because we were call upon and we also has to play for Real Madrid and it happens to every club. Marcelo added.

He admired the effort of his teammates;

““Jesé did very well, he was very helpful to the team, he ran and scored a goal. Everyone deserves game time and anyone, who gets a chance to play he has to run and help and whoever deserve it will play.  Danilo has amazing quality and is going to work a lot with Carvajal. We have very good full-backs.”

Marcelo also acknowledged the contribution of goalkeeper Keylor Navas behind the sticks and thinks that he has proved that he can replace Real Madrid legend Iker Casillas. Marcelo stated; Keylor is very great goalkeeper who has worked very hard when Casillas was here and this season he has prove that he is great.

Marcelo also thanked the fans, and further went on saying that it is very amazing feeling when fans sing his name.

” I am very happy, I always try to play with complete dedication and joy to make fans happy. It is  joyful to hear when they chant my name.”