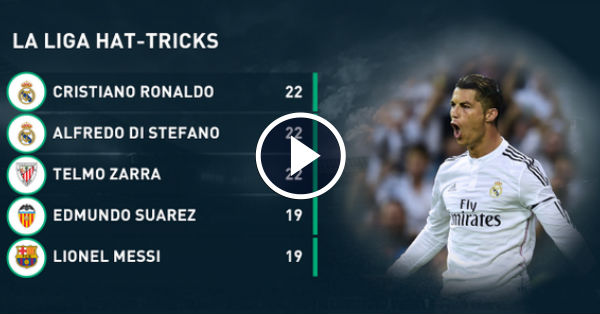 A swift preview of Cristiano Ronaldo all hat-tricks

Yet again Cristiano Ronaldo continued his sensational season by scoring a record-breaking 23rd hat-trick in La Liga and helped Real Madrid to beat Celta Vigo 3-0 at the Santiago Bernabeu on Saturday night. The latest hat-trick made Ronaldo leading hat-trick maker in the La Liga history surpassing legends like Alfredo Di Stefano and Telmo Zarra. Ronaldo’s third goal against Celta Vigo also brought his 200th La Liga goal from just 178 games.” A swift preview of Cristiano Ronaldo all hat-tricks” is compilation of those extraordinary moments when our champ stunned the opposition with his deadly combination of speed and skill and won the game for the side.

Latest Hat-trick came against Granada, when he scored 5 goals, including hat-trick in 8 minutes. Ronaldo’s only hat-trick for Manchester United came against Newcastle in the Premier League. Although he has scored over 100 goals during his stay at “Red Devils” camp. Ronaldo’s first hat-trick after joining Real Madrid came against Mallorca in May 5, 2010. It was Ronaldo’s only hat-trick of the 2009/10 season. Ronaldo made his 3rd hat-trick against racing in a La Liga match in October 2010. Just a month later, Ronaldo had another hat-trick, this one coming against Athletic Bilbao. At home against Villarreal, Ronaldo was the one who twice brought Real level against visitors. Ronaldo netted the third one also making his hat-trick as well as settling victory for the home side. Number 7 came against Seville and for the second time in the season, Ronaldo scored four goals in a single match. City rivals Getafe were the team against whom Ronaldo’s sixth and final hat-trick of the 2010/11 campaign came. Regardless of going behind, Real Madrid came back strongly to win this match 6-2. Ronaldo scored a hat-trick including goals two from the penalty spot. Ronaldo made this hat-trick in just 15 minutes, with his first coming in the 23rd minute and the last in the 38th as Real won the game 4-0. Ronaldo made his 12th hat-trick against Osasuna in a La Liga match .Real Madrid won the game by huge margin of a 7-1 . He scored two of his goals in the first half of the game and followed up with a penalty after the interval.

Ronaldo scored from the resulting penalty, headed his team ahead and capped a fine performance with a goal from range. It was Ronaldo’s seventh and last hat-trick of the season that came against Atletico Madrid .Real Madrid also won the La Liga title defeating the Atletico Madrid. Ronaldo’s first hat-trick, in the Champions League came against Ajax with the gap of just three days where he scored against Deportivo. CR7 made his 20th hat-trick verses Northern Ireland in a world cup qualifier match All three of his goals came in the second half of the match. Ronaldo yet again made a stunning hat-trick, the special thing about hat-trick was the assist of  Gareth Bale, who was making his Champions League debut for Real. Real Madrid 7-3 victory in this La Liga match was accompanied by Ronaldo hat-trick. CR7 made his 23rd hat-trick against Sociedad With two penalties. Real won the match by 5-1. Possibly the most important hat-trick of Ronaldo‘s international career .As he steered his country to a 3-2 win over Sweden in a play-off that took Portugal to the World Cup. Not only  scoring a hat-trick Ronaldo was able to provide couple of assists as well .Real were untouchable against Deportivo and scored eight goals in the game Ronaldo scored four out of five goals for Madrid which also took him past Alfredo Di Stefano on the all-time list of hat-tricks for Los Blancos. the 23 hat-trick No  in La Liga  came against Celta Vigo in 3-0 victory at the Bernabeu last Saturday. Ronaldo Seems in Full Commond against Granada in LaLiga match, where he netted 5 times. and also scored fastest hat-trick  in just 8 minutes. Watch Video of his 5 Goals vs Granada.