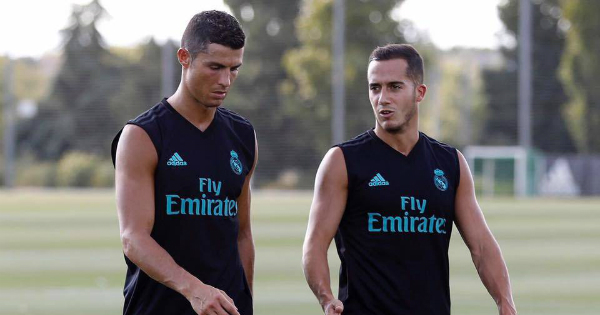 Real Madrid recently acquired a title under the leadership of coach Zinedine Zidane. While the celebration after the win continued in the dressing room, Cristiano Ronaldo and Lucas Vazquez were busy training on the pitch, trying to prepare for the clash of the club with Barcelona on Sunday. Fitness coach Antonio Pintus remained present during the fitness training of the two players, as they continued with some light training. This was preceded by their appearance in the second half of the Super Cup final in Macedonia. The Portuguese international was seen playing on the field for only 15 minutes, while the footballer from the Spanish team was added to the team around 24. Under the supervision of trainer Pintus, the two footballers worked for another 20 minutes amid all the heat and humidity. Ronaldo continued to get himself ready for the Spanish Super Cup, even though he appeared in only three practice sessions along with his squad ever since he returned from his holiday. At the moment, his aim is to reach his ultimate level of fitness, before appearing in the first leg at Camp Nou against arch rivals Barcelona. He has been seen sitting on the bench in several games during the last season, and the 32-year old player’s French coach has thorough knowledge of the situation of the player. That is the reason he benched the player in the match against Manchester United. This turned out to be the first sub of Ronaldo since 7 Jan 2015, under Carlo Ancelotti. Real Madrid coach Zidane understands that the stars of the team are needed at the peak of their physical condition, especially in the ultimate stages of the season. That is why Zidane is being really cautious with the four-time winner of Ballon d’Or. Nevertheless, the former Manchester United player is likely to be keen about his return to the field against the arch rivals of Real Madrid, i.e. Barca. And, to speak logically, it is likely that he will be seen playing for more than 15 minutes in that match, unlike his short appearance in the match against Manchester United on Tuesday. Besides Ronaldo, Vazquez is also expected to make an impactful come back to the squad, before a season full of new excitement at the Estadio Santiago Bernabeu. The return of Ronaldo to the training has recently been followed by a statement by team president Florentino Perez that Real Madrid would never sell their star player.