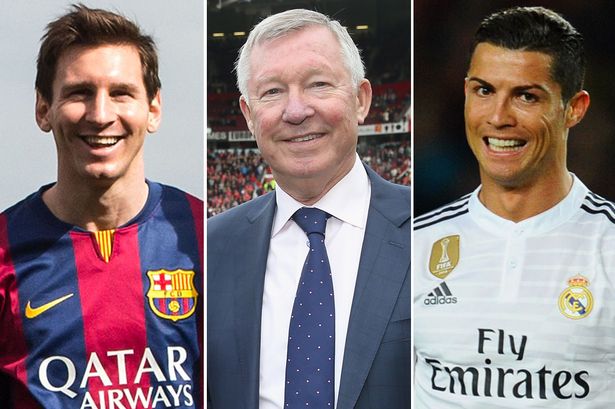 Sir Alex Ferguson claims there is no-one out there ready to challenge Cristiano Ronaldo and Lionel Messi for the title of the world’s best player.

Former Manchester United boss Ferguson believes Messi and Ronaldo are out there on their own and have no immediate threat to their status as the best on the planet.

Neymar has been touted as a contender to Messi and Ronaldo, but Ferguson claimed the Barcelona and Brazil star has yet to justify the hype around him.

“But to be honest I’m not sure there’s one sticking out at the moment. The boy Neymar gets a lot of publicity about the potential he’s got, but I think that’s still to be seen, still to be fulfilled.

“Certainly, most people I speak to speak highly of the boy. When I had Anderson at United, he spoke volumes about the boy’s ability.

“So hopefully he’ll be the next one who’ll produce the type of talent we see in Messi and Ronaldo.”

In a rare interview, Ferguson hailed Real Madrid boss Carlo Ancelotti – who is under pressure at the Bernabeu and on Manchester City’s radar – as one of the best coaches in the world,

And Ferguson suggested Ancelotti would have no trouble walking straight into another big job if Real ended this season empty-handed and he is shown the door.

Real have never kept a manager in a season when he has not won a trophy, and Ferguson said: “I think these types of jobs are difficult, particularly if there are elections coming up.

“Real Madrid and Barcelona have elections every third year I think it is.

“It doesn’t matter who the manager is. The election for a new president will be based on the success of the football team and what player he can buy and what coach he is going to sack.

“There’s no doubt it works that way, but I don’t think Carlo is under pressure. He probably is, because, as you know, of the dynamics of that kind of football club.

“But, for me, Carlo is one of the best coaches I’ve ever come across and one of my biggest opponents, so I wouldn’t worry about his future, that’s for sure.”