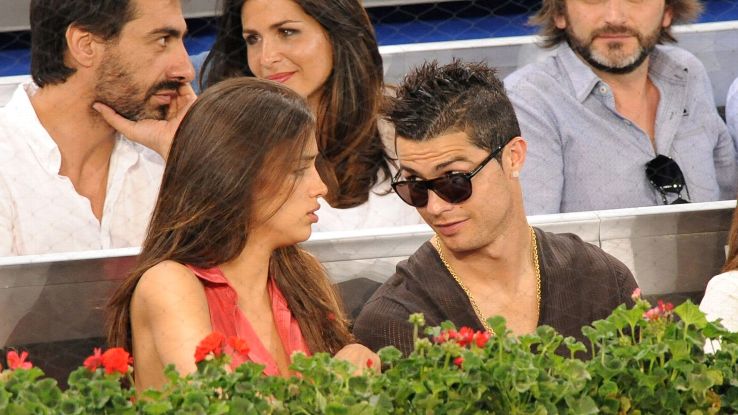 When one has a huge fan following, people are always curious to know what is going on your inside. Cristiano Ronaldo, the world-class player whose fan following crosses a 100 million on the social media has got charming looks and he has the potential to captivate others with it. Cristiano Ronaldo shared a relationship with Irina Shayk, a Russian model for about five years. It looked like the football maestro, Ronaldo had found the love of his life. Cristiano Ronaldo and Irina Shayk  locked their eyes on each other when they met each other in the beginning of the year 2010 for the shooting of an advertisement. It was an Emporio Armaani commercial that they both were working on. Both of them made a really glamorous couple on and off screen. It was this advertisement that began their story where their hearts melted for each other.

Irina Shayk is a Fashion model from Russia and has been popularly known for her various advertisements. She has been the model for Intimissimi lingerie, La Perla and Germaine de Capuccini. Her most voguish advertisements were those for Russian Sports Illustrated Swimsuit and Victoria’s Secret. She held the number one position in the list of the “50 Hottest women” of Russia and the “Sexiest Woman of the world”. She flaunted her acting skills for the first time in the movie Hercules in 2014.

Both Irina Shayk and Cristiano Ronaldo came up as a dazzling couple. They were sighted together on a number of occasions hand in hand and accompanied each other for different events. Both of them added value to each other. The affection that they felt for each other could be seen in their eyes. Shayk and Cristiano shared a really pleasant relationship with each other. Given below is a picture from the Madrid Open Tennis Tournament 2013 where both seem to be interested in each others company more than the game. Like any other human relationship, this one between Cristiano Ronaldo and Irina Shayk also went through many ups and downs. The one that was most talked of was Ronaldo becoming a father to a son in June 2010 and Irina not knowing about it. The name of the mother was kept secret. However, the alluring couple continued to date each other. Rumors went around that they got engaged but it was denied by both. In April 2013, Shayk and Cristiano Ronaldo’s relationship was again in the highlights as there were allegations on Ronaldo. It was said that Ronaldo cheated on Irina with a Brazilian model named Andressa Urach but Ronaldo furiously responded to it and rejected the false news. Despite of all these rumors, they continued to share their love with each other. But things did not continue to go good in their relationship. The couple could not stay together for long and soon the cute pair announced their breakup. The signs that triggered the fans to notice that the relationship was not going to continue any longer, was when Ronaldo attended the annual 2014 FIFA Ballon d’Or in Zurich without Irina by his side, nor did he mention her in his thanking list when he received the FIFA Ballon d’Or.  Moreover, Ronaldo also didn’t attend the premier of Irina’s debut film Hercules. She even un-followed him on Twitter that assured their fans that it was the end of their relationship. There has been a lot of tittle tattle about their breakup. Some say it was Ronaldo’s mother, Dolores Aveiro who thought she was not the right choice for his son. According to her, Ronaldo wanted someone who could look after his son but Irina had other priorities. But according to the statement given by Irina Shayk’s representative,

Irina Shayk has ended her relationship with Cristiano Ronaldo after five years. She has been close with his family throughout the course of their relationship. Any negative rumors with regards to Irina and the Ronaldo family are completely false, and have not been a factor in the cause of the split. Irina has no further comment at the time. To add to the stories, it is also said that Ronaldo called off their relationship when Irina refused to attend his mother’s surprise sixtieth birthday party. Many people say it all went wrong  after the couple returned from their trip to Dubai. Cristiano Ronaldo’s  female fans were glad to see them apart as the most talented and handsome football player was single again. On contrary, many wanted to see the lovely couple get married.

To put an end to all the airing rumors, Ronaldo gave in writing to the Associated Press about his breakup with Irina. He said,

After dating for five years, my relationship with Irina Shayk has come to an end. We believed it would be best for both of us to take this step now. I wish Irina the greatest happiness.

With this, the much talked about couple broke up and parted their ways. All those recollections of attending the FIFA ceremonies, award functions and tennis games together are now just the past. Cristiano Ronaldo, the most expensive football player is the heart throb of many. When he quit his relationship with the Russian supermodel Irina in January 2015, many of his fans rejoiced as Ronaldo was a bachelor again. According to the latest news and updates Cristiano Ronaldo is dating Lucia Villalon who is from Spain. She is a TV reporter by profession. She has studied journalism and law. It is said that Villalon is just as pretty as Irina. However, this possible relationship has been confirmed by none.

Cristiano Ronaldo and Irina Shayk’s pair was one of the most beautiful couples in the football world. It would not be an exaggeration to say that they completed each other in all ways. However, Ronaldo’s fans want to see their soccer star well settled both in his personal and professional life. It is time that would decide if it was the right choice made by the two.