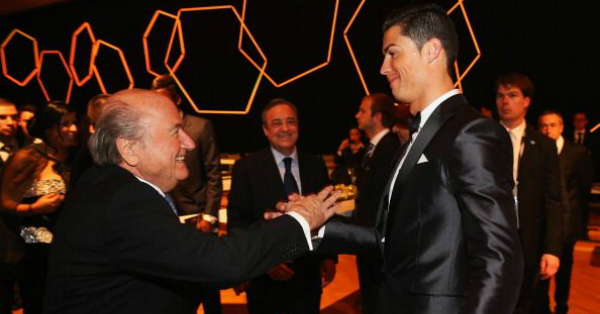 Sepp Blatter defends Ronaldo, blames football-blaming culture for tax situation
81-year Sepp Blatter, the former president of FIFA, has recently come to the defence of Ronaldo, while discussing the Real Madrid player’s tax situation. he compared the situation of Cristiano Ronaldo to that of Roger Federer, and claimed that the tennis legend is considered ‘untouchable’ in the eyes of everyone. Blatter further spoke about this, and said that the current culture of suspicion in football is to blame for the accusations brought upon the player by the Spanish authorities, and the subsequent investigation of the player. The Spanish prosecutors have brought the complaint that Ronaldo is guilty of a voluntary and conscious breach of his tax responsibilities, and has evaded paying €14.7 million. Gestifute, the representatives of the Portuguese player, have denied the accusations. The player’s club, Real Madrid, has mentioned in a statement that they are sure that Ronaldo will be able to prove his innocence. The player’s case will be presented in the court on July 31. Ironically, Blatter is currently serving a ban from any football-related activity, because of his disloyal payment to Michel Platini, the former UEFA chief. [MyAd]
During an interview with RTS, the former Swiss football administrator said that the situation which Ronaldo is currently facing is the result of long-term distrust in the sport and those associated with it, which has currently taken the form of an epidemic. He compared this to the situation of other sports, and brought up the subject o Roger Federer. He mentioned that no one will suspect Federer, who also makes large sums of money, because players like him who are associated with other elite sports are untouchable. He even cited the example of Diego Maradona’s Hand of God against England, back in the World Cup of 1986, to talk about the temptation of athletes. He said thet even though it’s not right, some people in the world of football cheat, and that is the reason why this sport has set itself so many safeguards. A couple of years ago, during n interview, Blatter had mocked Ronaldo for his style of playing and his hairstyles. Comparing the Real Madrid player to his arch rival, Lionel Messi, Blatter had called the Barca player a good boy, and said that Ronaldo is like a commando on the field, and spends a lot on his hairstyle, indicating that these are what help the player gain popularity. He later apologised to the player on social media for the comments and the impersonation he had performed during the same interview to which Ronaldo had given the appropriate response by celebrating his goal with a salute.
Monday, July 17, 2017