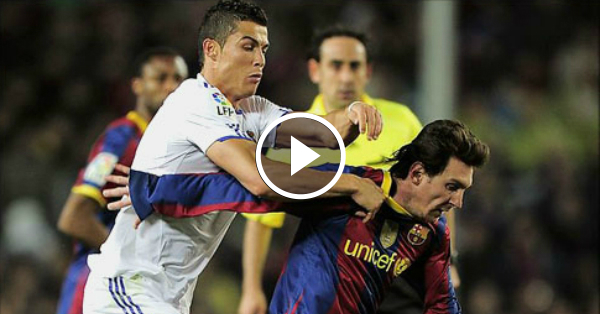 Ronaldo vs Messi Fights and Angry Moments on the Field

Cristiano Ronaldo or Lionel Messi: Who is a greater player? There is little doubt that these two are the greatest players in the world right now. But, there’s now big question that baffles the world. Who is better between the two? Football critics and fans are just unable to come to a common point of agreement in this regard. Half the world belongs to camp Ronaldo, while the other half is a devoted Messi. If there’s one thing they will all agree upon, then it is the simple fact that the Ronaldo vs Messi rivalry is something that the entire world enjoys.

Ronaldo vs Messi Fights and Angry Moments on the Field Every time Ronaldo and Messi have faced each other, on the field something marvellous has happened. Everyone has seen some incredible displays, and their tricks and skills with the ball. Several memorable moments in the history of soccer have been created when these two players have faced each other. And, some exceptional fights have taken place between Ronaldo and Messi, and their teams. Ronaldo and Messi have been the main pillars of their clubs in the recent past. They are, in fact, the main representatives, of the two teams, and have become the faces of their clubs. That’s the reason the Real Madrid vs Barcelona rivalry has become synonymous to Ronaldo vs Messi. Or vice versa. This rivalry is not limited to the Barca vs Los Blancos matches alone. The world loves to pit two players are pitted against each other, in terms of every aspect of their professional and personal lives. How many goals they score in each season, how many awards they win, how many trophies they help to lift – there are many things. But, the rivalry is not just in their professional lives. Their personal lives have come under the scanne, as well. Everything from their charity to their earnings, their behaviour with their fans to their new hairstyles for charity – everything is important for the world, and must be compared. Now, what kind of a strain does this create between Ronaldo and Messi? The players say that their fights are nothing but on-field, nd their rivalry, strictly professional. Whatever they might feel in their mind, the two players maintain a respectful stance towards.