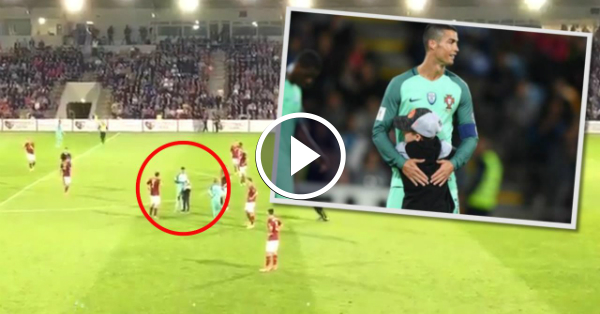 Everybody loved to hate Ronaldo. There are the haters and the media. And, they all love to pick on Ronaldo for every little slip of temper he has, and they make a headline or a social media post about it. These people easily miss the kind things that he does. Yes, Ronaldo can be an extreme softie towards the people he meets. And, if that person is a child, then there’s no way that Ronaldo will dishearten him. That’s why, when a child intruded the pitch after Portugal’s recent match against Latvia, Ronaldo did not disappoint the child. Ronaldo joined his national team in the World Cup Qualifier match against Latvia, after returning from two successful tournaments with his club, Real Madrid. In this match, Ronaldo scored two incredible goals, and went on to help his team score the third goal to seal the victory. Fans were obviously extremely excited to watch Ronaldo and his boys play such an amazing game. One such excited fan, a little boy, came sprinting into the ground. Ronaldo, who has always obliged his fans, hugged the little boy on the halfway line, with a broad smile on his face. As the player waited, the stewards arrived to escort the boy away from the pitch. It is obvious that the little boy’s day was made by this simple gesture. he has a story to tell for many years to come. This is not the only pitch intruder whose day Ronaldo has made. We have seen how Ronaldo once clicked selfies with an invader. Ronaldo knows and acknowledges the importance of his fans. These simple gestures show the kindness in his heart, no matter what the haters think about him.