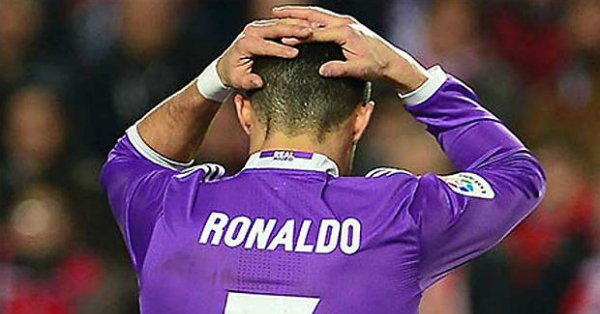 Cristiano Ronaldo is, without a doubt, Captain Controversy. Every other day, he finds himself on the headline, because of something new and weird he has done.Once he posted a picture of himself with a foot upon the base of a Buddha statue and infuriated the entire Buddhist community. Another time, he made a negative comment about Iceland’s celebrations over the draw with Portugal, and found himself being criticised because of such a comment about a small nation. The greatest of these include the identity of his eldest son’s mom, and the one he is currently going through, i.e. tax evasion charges brought to him by the Spanish authorities, not to mention some the others like the rape allegation against him that turned out to be a scam. He has now ended up doing something else on social media that is likely to earn him some criticism. He has posted a picture of himself and Jose Semedo standing in a pool, topless. So, how is that a controversy, you ask? Ronaldo has, after all, done far bolder shoots and appeared without too many clothes in several shoots. So, why is this one controversial? Because of the caption. Ronaldo has, himself uploaded the picture on and added the caption,  “Perfect Match Black And White chocolate”. Now, people who drool over the perfectly sculpted bodies of the two men in the picture might agree that comparing himself and his friend to chocolate is nothing less than flattering. However, one user has him a “racist pic”, though others have insisted that the caption has nothing offensive about it. In the picture, Ronaldo and his friend are showing off their bulging muscles, and Ronaldo’s smile says that he is enjoying himself. After leading Real Madrid to win La Liga and Champions League, Ronaldo joined his national team in Russia to play in the Confederations Cup. The team got knocked out in the semifinal round. And, Ronaldo returned to meet his newly-born twin boys. There are further rumours that his girlfriend, Georgina Rodriguez, is pregnant with his child, and the couple is expecting the baby in October. Meanwhile, the controversy regarding the tax evasion charges have not yet does down, and questions are being raised about his future in Real Madrid. The player himself has refused to say anything about whether or not he will leave the club, though he has mentioned that he has never threatened to leave.