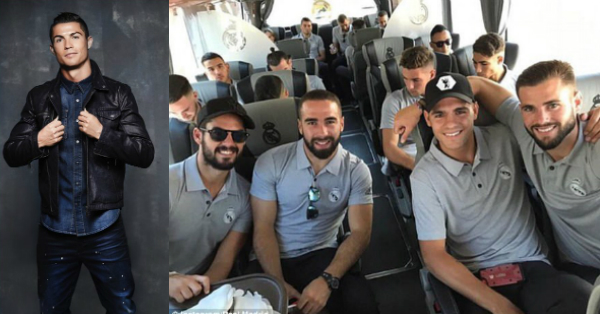 Ronaldo left out of Real Madrid’s squad for US tour

The 26-man squad of Real Madrid, travelling to the United States for the pre-season tour this summer, has just been named, and Cristiano Ronaldo is not on the list. But, it can be said that the Portuguese player’s omission was expected. The club’s players are busy in some serious training for the 2017-18 season, to be able to defend their La Liga and Champions League titles which they collected in the season that just came to a close. In the meanwhile, Ronaldo, who was in Russia to represent his national team in the Confederations Cup a couple of weeks ago, is also in the US. Only, he is relaxing and holidaying with his close ones, instead of training.

Ronaldo left out of Real Madrid’s squad for US tour It is likely that Ronaldo will return to his training in early August. This will ensure that the player has four weeks in his hands to rest, relax and recuperate, before he goes back to work. Ronaldo’s noteworthy teammates, like Gareth Bale, Marcelo, Karim Benzema, Toni Kroos, Luka Modric, etc. are among the representatives of the club, who left for the US on Tuesday afternoon. The captain of the club, Sergio Ramos, is expected to join the rest of the Real Madrid boys soon, even though he was not joined the others yet. Teenage left-back, Theo Hernandez, has just moved in from cross-town rival team Atletico Madrid and joined the Real Madrid squad. A couple of Castilla players, including defenders, including Achraf Hakimi and Alvaro Tejero, have also been promoted. Zidane’s son Luca has assumed the position of fourth choice goalkeeper, and will be competing with Rubén Yáñez to gain his place in the first-team squad. Marco Asensio and Jesus Vallejo, who represented Spain in the U-21 European Championship, haven’t joined the group. Real Madrid will be playing in four matches in the US, against Manchester United, Manchester City and Barcelona. The team will be back in Europe to face Manchester United in the UEFA Super Cup in Macedonia to be held on on 8th August 2017. Ronaldo is expected to be back in the team by then.