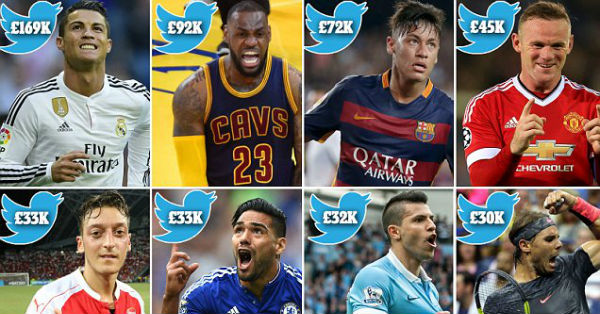 Ronaldo is the eighth most valuable athlete brand? A Forbes study reveals that Cristiano Ronaldo is the eighth most valuable athlete brand in the world.

Real Madrid’s record-holding goalscorer is the only footballer to make it to the top 10, with tennis superstar Roger Federer and golf’s Rory McIlroy also featuring.

Woods hasn’t won a major since the 2008 US Open and also missed the cut in three majors this year.

The world’s highest-paid athletes are a much richer and more international group than those who dominated the same list 20 years ago, Forbes said.

There is also a much better number of soccer players in the 2015 list compared to that of  20 years ago, which Forbes attributed to a 1995 court verdict that allowed players whose contracts were up to switch teams without a transfer fee.

The top 40 earners in sport over the last year combined to culminate $1.9 billion in prize money, salary and endorsements, up significantly from the $490 million made by the highest earners in 1995, according to Forbes.

Here is the list showing the top 10 athletes disclosed by Forbes.