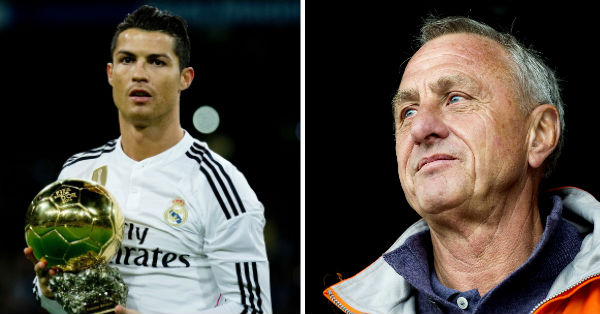 Ronaldo is a  great goal scorer but not a team player like Lionel Messi: Johan Cruyff

Football great Johan Cruyff recently said that current Barcelona star Lionel Messi is a better player than the Portuguese star, Cristiano Ronaldo. He also stated that Ronaldo is just “a great goal scorer” who isn’t concerned about how his team plays overall. Cruyff who is well known as one of the greatest footballer played from 1973 to 1978 at the Camp Nou and he was the manager of the Catalan club from 1988 to 1996 which won the champions league trophy under his guidance for the very first time.

The 68 old year Dutchman said in Mundo Deportivo that Messi is more of a team player than Ronaldo. Ronaldo is only worried about his own goals instead of passes or assists, he added.

“I have always liked the little technical players because I was like that,” Cruyff said. “Cristiano is a good player, but he is a goal scorer. He will never be a player who can make a team, or who is concerned that the team plays well, he is just worried about finishing.

“By contrast, Messi is much more a team player: he gives passes, makes many more assists. As a player, not as a goalscorer, although he scores many goals.”

Cruyff made a significant point describing the difference between a ‘good football player’ and a ‘good goal scorer’. He joined by saying that many fans fail to understand the vital difference about his saying.

“For me there is a big difference between being a great player and a goalscorer,” he said. “That is why you must look at things differently, looking at the details. Very few people do that. It is difficult to explain because nobody will understand it.”

Cruyff ended the conversation by admitting Messi as the hot favourite for the 2015 Ballon d’Or which Ronaldo has claimed in the last two years- 2013 and 2014. He believes there is no existence of any debate for the Ballon d’Or for Ronaldo over Messi.

“There is no debate, nobody is at Messi’s level,” he said. “They will give it to him again.”