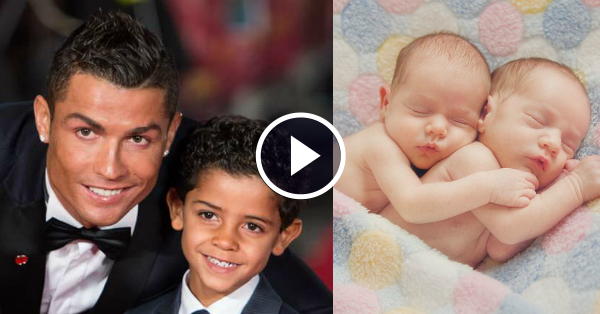 Speculations and rumours have been around for a couple of weeks about the birth of Ronaldo’s twins. Portuguese media reported earlier that Ronaldo has had twin babies, a boy and a girl, to a surrogate mother, and that his mother in the West Coast of the United States, and that Ronaldo’s mother had flown to bring the babies home. Nothing was confirmed by Ronaldo, his mother, Dolores Santos, or his girlfriend, Georgina Rodriguez. However, after Portugal’s loss to Chile in the semifinal round of the Confederations Cup, Ronaldo took to the social media to confirm the birth of his new-born twin babies! On Wednesday, a message was published on social media platform by Ronaldo that confirmed what the world had been speculating for months – that he is a father, once again. His message, written in Portugues, loosely translates to the following in English:

“I was in the service of the National Team (Portugal), and had committed my body and soul to it, even when I knew my twin sons were born.

Sadly, we were unable to achieve the objective we wanted in the tournament (Confederations Cup), but I hope we will continue to bring joy to the Portuguese.

The President of the Portuguese Football Federation ((Fernando Gomes) and National Team Manager (Fernando Santos) had an attitude today that touched my heart me and I will not forget it.

I am elated to be able to be with my children for the first time.” It is quite clear that the reports so far had been based on rumours, considering how they mentioned that the Ronaldo has had a boy and a girl, and named them Mateo and Eva, when, in reality, he has had two boys. It is likely that Ronaldo’s girlfriend, Georgina Rodriguez, who was earlier reported to have made a statement about how she will help Ronaldo raise the kids, will be by her footballer boyfriend’s side, along with his mother. Georgina herself is rumoured to be pregnant for five months. Ronaldo, a doting father to 7 years old Cristiano Ronaldo jr., has always been open about his love for children.