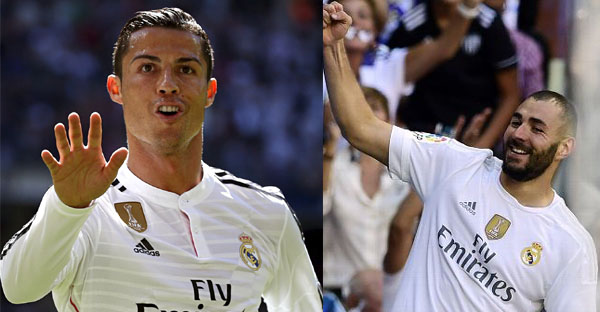 Karim Benzema scored to help Real Madrid eke out a 1-0 win over Granada on Saturday and take the overnight lead in La Liga, though Cristiano Ronaldo was forced to wait to score the 500th goal of his career.

Ronaldo, sitting on 499 goals, saw his scoring run end after finding the net eight times in his previous two matches.

Granada’s disciplined defense and the solid goalkeeping of Andres Fernandez held Madrid in check, while the visitors’ attack matched their star-studded hosts chance for chance in an evenly-contested first half.

The visitors’ best opportunity came in the 20th when striker Youssef El Arabi had a goal waived off for a questionable offside call.
Keylor Navas thwarted Granada attack before Benzema tilted the match in Madrid’s favour 10 minutes after half-time with a close-range header to put the Santiago Bernabeu crowd at ease.

Navas, who had been seconds away from being sent to Manchester United at the close of the summer window as part of Madrid’s failed transfer for David de Gea, extended the club record to a fifth consecutive clean sheet.

Madrid have 10 points, one more than Atletico and Barcelona, who can reclaim the league lead against Levante on Sunday.
Fernando Torres and Angel Correa both scored as second-half substitutes and inspired Atletico Madrid to a 2-0 win at Eibar, leaving Diego Simeone’s side ahead of Barcelona on goal difference.

Correa scored the first ball he touched in the 62nd minute, deftly separating from a defender to score after Torres chased down a long ball and laid off for the Argentine.

Correa returned the favour by playing Torres through for him to lift the ball over sliding keeper Asier Riesgo in the 77th minute.

A stoppage-time goal from Hernan Perez saw Espanyol sneak past 10-man Real Sociedad 3-2 for their second win of the season.

In an enthralling encounter, Sociedad led after 19 minutes through Imanol Agirretxe before Gerard Moreno levelled from the penalty spot moments after goalkeeper Geronimo Rulli had been sent off.

Espanyol then went ahead thanks to Enzo Roco’s 71st-minute strike but Jonathas looked to have secured a point for the home side with his equaliser four minutes from time.

However, there was late drama to come as Roco supplied the ball which was finished by Perez in the final minute, snatching a win for Espanyol which banished memories of last weekend’s 6-0 hammering to Real Madrid.

Valencia’s underwhelming start to the season continued as they were held to a goalless draw at their Mestalla home by Real Betis, who played most of the second half with 10 men.