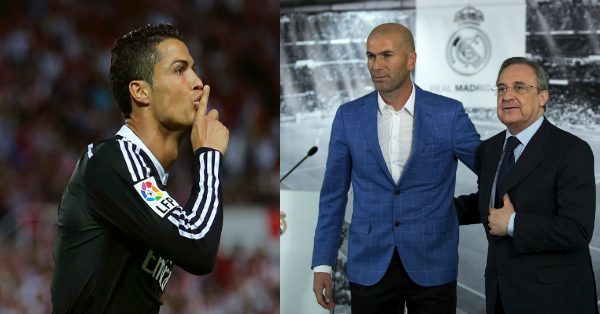 Cristiano Ronaldo has been enjoying his holidays and using the time to bond with his two newly born twin boys ever since Portugal’s exit from the Confederations Cup. Real Madrid authorities have been trying to give him as much privacy as possible. However, it seems that they are now upset about Ronaldo’s behaviour. This season, Ronaldo helped his club win the La Liga as well as the Champions League trophies, after which he left for Russia to represent Portugal in the Confederations Cup. Meanwhile, after the tax evasion charges were brought against Ronaldo by the Spanish authorities, Real Madrid issued a statement saying that they believed Ronaldo to be a responsible person, and that they were sure he would be able to prove his innocence. Apparently, this was not enough for Ronaldo. He had hoped for a stronger support system from Real Madrid. As the media started to ask various questions in this regard, Ronaldo chose to remain quiet, and posted a dignified response in his own style – with a picture of himself with a finger on his lips. Media house A bola was quick to jump to a conclusion, and published that Ronaldo had decided to leave the club, and that the decision was irreversible. After Portugal’s loss, Ronaldo declared to the world that he has had two babies, and left Russia to meet his new boys. Meanwhile, several speculations started to do the rounds, about which club he will join, the amounts offered by Manchester United, PSG and Chinese clubs had offered for him, etc. Perez said in an interview that he believed Ronaldo would not leave the club. There were reports that Perez had allegedly told his friends in the media that Ronaldo had no other club to go to since he had had no offer, due to his age. Ronaldo has remained silent all throughout about this. He has neither confirmed nor denied his exit plan from Real Madrid. Some reports claimed that he had met with Real Madrid authorities the discussion had allowed the club to be in peace of not losing their star. Meanwhile, all that the eager football followers have come to know is that Ronaldo never threatened to leave Real Madrid, and that he had just mentioned to his teammates at a dinner that he was upset about Real Madrid’s reaction to the tax allegations. He has also chosen to remain absolutely silent about his plans. This, apprently, has left the club a little upset. They have reportedly not received any communication from the player’s side. They are unhappy that the player has used the media to allow the rise of speculations about his summer exit, an has himself not said a word, either to the club authorities, or the to the world. It is likely that the two parties will have a discussion this week, to determine the future of the player and the club.