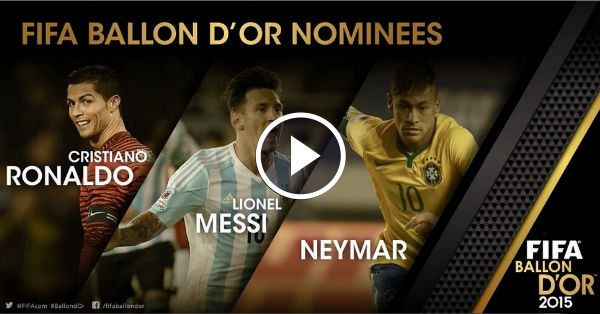 Brazilian and Real Madrid legend  Ronaldo has backed his compatriot  Neymar to win  Ballon d’Or, ahead of Loinel Messi and Cristiano Ronaldo.

The former Real Madrid star, who was named as FIFA Player of the year in  1997 and 2002,  believes Neymar is ready to compete with the usual suspects of Ballon d’Or, however he feels either  Loinel Messi or Cristiano Ronaldo will claim the prestigious award in January.

The Ballon d’Or Battle between CR7, Messi and Neymar:

The former Santos man, who struggled in his debut campaign, has finally taken the central stage in the absence of Loinel Messi. Along with Argentinian International and ex Liverpool striker Luis Suarez formed the hottest attacking partnership in the Europe, as they helped Barcelona to win Champions League, La-Liga and Copa Del Rey in  treble winning campaign. Injury to Loinel Messi at the start of the  season was a big blow for the Catalans, however Neymar thrives in the absence of Argentina Captain and took the central stage for Barcelona. Spanish Champions are going strong on the, both fronts and has become nightmare for any opposition, and Neymar is finally look like the player, who can fill the boots of Loinel Messi.

Since his raise from the youth ranks of Santos, there were suggestions that current Brazil Captain is the next big thing in the Football and two times World Cup winner believes it is time for him to claim Ballon dr. “I would bet on Neymar winning the FIFA Ballon d’Or 2016. I think he’s still growing a lot and I think the growth of Cristiano Ronaldo and Lionel Messi has reached its peak,” the former Barcelona and Real Madrid striker told FIFA.com

“I really want Neymar to win and break up the era of Ronaldo and Messi, but I think this year it will be between the two of them again.”