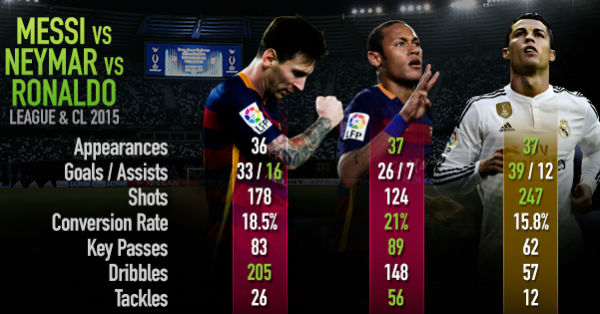 Ronaldo, one of the best footballer of his time played for both Clasico rivals, Barcelona and Real Madrid and has won two World Cup, while representing Brazil. The Brazilian icon is very impressed with the development of his compatriot in recent years and has backed him to win Ballon d’Or award in 2016:

“I would bet on Neymar next year. I think Neymar is growing a lot and I think at the same time growth of  Cristiano Ronaldo and Lionel Messi has reached to its limit. May be they will be there for one for two year and I think it is natural that Neymar overtake that position in which Brazil always has representatives. Both Cristiano Ronaldo and Lionel Messi are sharing  Ballon d’Or, since 2008, with Barcelona ace has won the prestigious award for forth times and former Manchester United man has won it for three times.

Cristiano Ronaldo has been named FIFA Player of the year for last two years in the row, while he is strong favorite defend his Ballon d’Or crown along with Lionel Messi.

However, going in to this season, Neymar is certainly perform like a best  player in the World. With Messi was out-injured, the Brazilian forward came out of the shadow of Argentina Captain and showed with his display that he is the worthy heir of him.