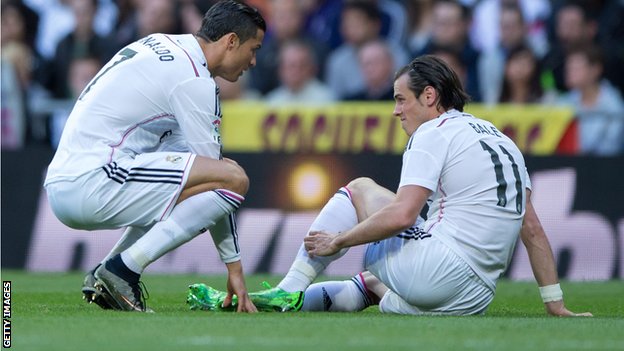 The Best club in football Real Madrid has confirmed the news of its one of the best player Bale. Now the question is this, would Ronaldo be enough for the team to sustain and lead the team to next victory. Real Madrid Confirms Bale’s Calf Injury! Would Ronaldo Be Enough To Sustain Madrid?All the eyes are looking towards Cristiano Ronaldo because they expect that he will repeat the best performance of his previous matches.

Real Madrid have confirmed that Gareth Bale has suffered a calf injury but have not given an indication of his likely return date.

Bale had to be substituted during Madrid’s 4-0 win over Shakhtar Donetsk on Tuesday and the club announced on Thursday morning that tests had shown the Wales international has damaged his calf.

A club statement read: “Following the tests carried out on Gareth Bale today in the Sanitas La Moraleja University Hospital, the player has been diagnosed with a soleus muscle injury in his left leg. His condition will be evaluated.”
AS suggests Bale, who has now suffered four calf injuries in two years at the Bernabeu, is set to be absent for at least two weeks.

Madrid coach Rafa Benitez said after the Shakhtar match that Bale had suffered “a spasm in his calf muscle” and added: “Gareth had a similar issue last year, so [we] must wait a while.”

The club had confirmed on Wednesday that Sergio Ramos had suffered a dislocated shoulder in the same game.

Although Real Madrid did not set a timetable for Ramos’ return, AS reported after Thursday’s training session that Ramos will be out less than 10 days.