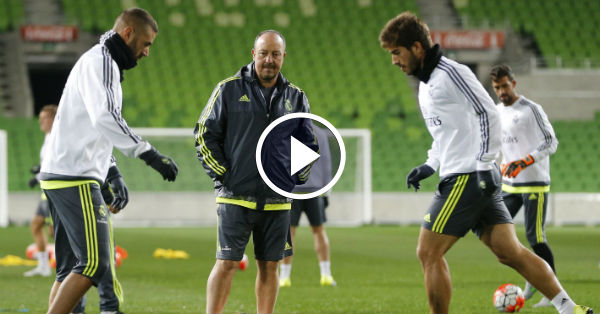 Real Madrid manager Rafa Benitez has reassured that there is no problem between him and midfielder James Rodriguez.

Previously, Spanish Media claimed that former Porto star is unhappy with Real Madrid coach for handling his return from the injury, and had an argument with Rafa for lack of playing time. However, Spanish tactician rubbished  the talks of reported rift.

Speaking to the press ahead of Real Madrid’s Copa Del Rey game he said:

“When we analyse it, we can’t forget this is a player who has been injured for 55 days. There’s no problem. He’s a great player.

“The more James trains and plays the closer he’ll be to the James we all want to see. He has my full support and confidence. “This is Real Madrid, where competition is at the maximum. Everyone who played against Eibar did well, at a very complicated ground.

“I’m delighted when any of my players does well, whether it’s James, Isco, Cristiano, Karim Benzema, Gareth Bale.

“I’ve talked to James and the situation is clear. I want to see the best James in every game, scoring a lot of goals. “There’ll be rotations tomorrow. Marcelo won’t play. He’s in the final stages of recovery. He’s kicking the ball. There’s a lot of time until January and we have players for his position.”

“Benzema? I consider him a great player and a great colleague. On a personal level he’s a sensational guy and has our support.

“He’s fundamental in attack. He makes the players around him better. We support him as a person and I’m happy with him as a player.

“Benzema is coming from a long period of inactivity and the minutes should be dispensed carefully. He’s very important to us.”