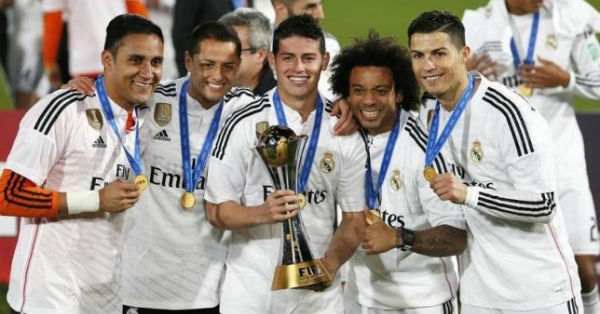 The star midfielder was the automatic starter under Real Madrid boss Carlo Ancelotti, but recently has struggled to get into the starting lineup under the former Liverpool manager. With Gareth Bale has been preferred at the number 10,  Rafa Benítez  has unable to find room for him in the starting 11.  James Rodríguez was the star man at World Cup 2014 and had the decent debut campaign at Santiago Bernabéu, but has become frustrated with limited first team opportunities. If recent reports to be believed, the Colombian International was involved in argument with Real Madrid head coach. However,  Rafa Benítez revealed he is very happy with his all players and said it is privilege to work with star like   James Rodríguez. He was addressing to press conference ahead of Real Madrid encounter of Spanish top flight with Eibar. He said:

“”I’m delighted to have a player of James’ calibre. I hope he can be at his best in every game, score loads of goals and help Real Madrid to win loads of matches and titles.”

Given the fact,  James Rodríguez came back to Real Madrid from a lengthy layoff, and  Rafa Benítez has adopted more cautious approach towards him to avoid further setback. At the same time, Spaniard find it hard to drop former Malaga man Isco, with Spanish International has been suspended for next two games, James is likely to get his chance in the first-eleven. “Competition for places is very high here and having players like him is a privilege. My job is to get the best performance out of him in the games he’s picked to play in.”