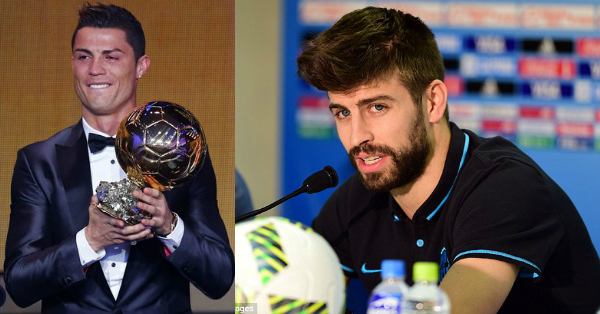 Pique says Ronaldo will win Ballon d’Or, and talks about Messi and Ramos

Barcelona centre-back Gerard Pique admits that Cristiano Ronaldo is the favourite this season for the running of the Ballon d’Or. However, he insists that in the long run, it is his club-mate, Lionel Messi, who will behind a greater legacy as the greatest player in the world. To put is in short, Pique believes that Ronaldo will probably win the Ballon d’Or this year, but Messi remains the greater player between the two. The numbers of 2016-17  definitely prove that Ronaldo is more likely to lift the most prestigious individual award in football, i.e. the Ballon d’Or.

Pique says Ronaldo will win Ballon d’Or, and talks about Messi and Ramos Ronaldo has led his team to secure both the La Liga, as well as the Champions League titles, this season. Messi, on the other hand, has only managed to end up with the Copa del Rey to his name. However, with 37 goals, Messi has outscored Ronaldo who has managed to secure 25 goals.

[MyAd]
But, Pique believes that since Ronaldo helped win team medals, those will count more than the individual achievements and he has more chances of gaining his 5th Ballon d’Or, thus levelling the record of Messi. During an interview with the Qatar TV show ONE, Pique mentioned that Ronaldo has won the Champions League and the La Liga, so he is a favourite.

Messi is considered the best player in history, he added, and there are other options. Over the years, Pique has remained at the forefront of the Classico wars. In fact, he is often the leader of the Catalan side of the battles. He has been seen partaking in verbal and physical confrontations with the Los Blancos players, and has even criticised the club and its players quite openly. Real Madrid captain Sergio Ramos has been on the receiving end of the verbal attacks by Pique, but the Barca player says that all these encounters are in good nature and purely in the spirit of the sport, while trying to defend their colours. He admits that the rivalry between Real Madrid and Barcelona is quite huge, and when it comes to the battles between the two teams, Ramos needs to defend his club, just like Pique does with Barcelona. He added that when the two teams face each other, they are there to defend their colours. On the other hand, when it comes to the Spanish national team, Pique and Ramos fight together. Meanwhile, Ronaldo’s return to Real Madrid seems uncertain, as the player has not yet committed anything to club or discussed the rumours surrounding his possible exit from the club, after the tax defraudations charges brought to the player by the Spanish authorities, and the player’s unhappiness over Real Madrid’s lack of appropriate support for him.