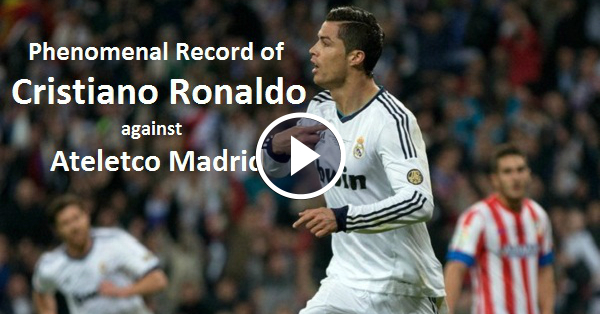 Cristiano Ronaldo is the best player on the planet Earth and this means that non of the teams he plays against can survive against the extraordinary level of skill and game play by Ronaldo. There are many teams against which Ronaldo have shown incredible performances. One of the teams which have suffered a lot from the amazing game play and scoring ability of Ronaldo is Atletico Madrid. Yes ! the Real Madrid neighbors in Madrid have got some good thrashing from Ronaldo ever since he has been playing in LaLiga. Over the past few years the Madrid derbies have been very common. In LaLiga as well as the Copa Del Rey and even in the final of the Champions League. Ronaldo boosts a great record against Atletico Madrid and the striker has netted a total of 15 goals in 20 matches. Atletico Madrid has over the years improved a lot and has developed in to a formidable opponent for Real Madrid and Barcelona who usually dominate the league. Having a record of 0.75 goals per game against Ateletico Madrid shows the consistency of CR7. With amazing form that Ronaldo is in since last season and the record which he boosts against Atletico Madrid, the Manager of Atletico will be hoping for a miracle in order for Ronaldo not to perform against his team in the upcoming season.