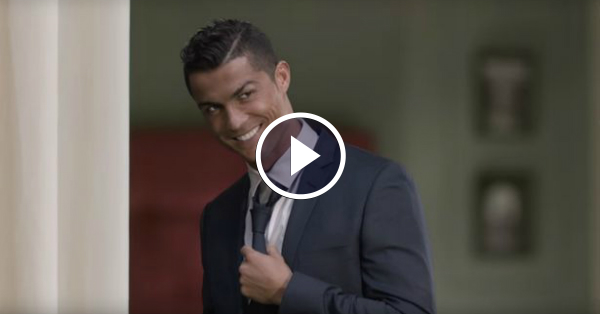 Cristiano Ronaldo is hands down the biggest football star today. He is also one of the most handsome ones there is. So, there is no element of surprise in the fact that he is one of the favourites among big brands who want his to promote them. They are ready to dole huge big moolah to rope in Ronaldo. And the Portuguese player has appeared in a number of advertisements. Some of them are intelligent and motivational. But, he doesn’t exactly have a dearth of strange advertisements, either. And here’s an instance of Cristiano Ronaldo in a weird French ad.

Indeed, Ronaldo’s handsome face is on the posters of some of the biggest brands in the world. Most of these have an international reputation. From Nike to Jacob & Co., from KFC to Samsung, he is the face of the most famous brands in the world, with consumer base spanning across almost all countries. And needless to say, he makes a huge amount of money from these ads. Most of them are extremely smart – cutting-edge, even – and show off great story lines or graphics. While he appears as a robot in one of them, he goes through a body switch in another. Alas, all ads cannot be the same. And here’s one ad which is starkly different from most of the high-end commercials in which he appears. Through no fault of his own, Ronaldo has added to his list of weird advertisements, just like the Japanese ad where he appears to be revealing the secret behind his perfectly chiselled face! In this one, Ronaldo seems to have caught the attention of an attractive neighbour. What happens next? Watch the video to find out more!