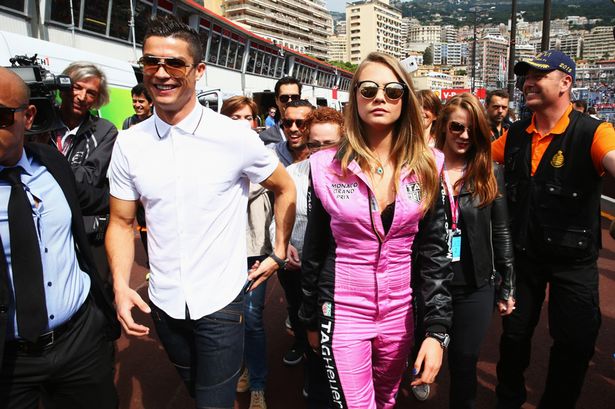 Less than 24 hours after netting a hat-trick for Real Madrid, Ronaldo arrived at Monaco by boat before heading off for a meet and greet with the McLaren team
Cristiano Ronaldo quickly swapped the football pitch for the race circuit as he was pictured in Monaco’s VIP hotspots on the morning of the Formula 1 Grand Prix.

The Real Madrid winger was pictured in sunglasses and mingling with friends, including supermodel Cara Delevigne, as he enjoyed the sunshine before the richest race on the F1 calendar.

Ronaldo is newly single after splitting with long-term girlfriend Irina Shayk. The Russian has since accused the former Man United hero of cheating on her repeatedly. Shayk is now with Hollywood star Bradley Cooper.

Ronaldo arrived at the famous circuit by boat, less than 24 hours after playing 60 minutes and scoring a hat-trick for Real Madrid.

The winger found the net three times during the first half against Getafe, as Madrid waltzed their way to a 7-3 win on the final day of the La Liga season.
But Ronaldo was substituted off on 58 minutes as manager Carlo Ancelotti allowed 16-year-old Martin Odegaard his first appearance for Los Blancos, making him the youngest player in the club’s history.

Ronaldo is expected to now stay in Monaco to watch the Grand Prix, in which Lewis Hamilton is on pole for the road race for the first time in his career.